Created by Japanese artist Monkey Punch (surprisingly, not his real name) in the 1960s, Lupin the Third was a mixture of James Bond, Matt Helm, Cary Grant from To Catch a Thief, and whatever guy you can think of who grabs boobs a lot. Bill Clinton, I guess. Lupin the Third was meant to be the jet-setting super-thief great grandson of Arsene Lupin, a beloved French pulp character who was very much the “gentleman thief.” Lupin the Third jettisons the gentleman part most of the time but excels in the thievery department. Quite in contrast to his famous relative, Lupin the Third is a crass, horny, occasionally sleazy, always smart-alec guy with a weakness for beautiful girls. Together with his parters in crime Jigen (a former yakuza hitman and reportedly the greatest crack shot in the world) and Goemon (a guy who identifies a little too heavily with the romantic ideal of the mysterious, wandering samurai), Lupin trots the globe in search of treasure to be found, banks to be robbed, chicks to be nailed, and smug rich guys to be kicked in the jaw. Complicating Lupin’s life are two more characters: dogged Interpol inspector Zenigata, whose entire life revolves around finally arresting the wily Lupin; and Fujiko (whose name means “peaks”), a big-breasted flirt who is sometimes Lupin’s partner, sometimes his rival, and usually both. 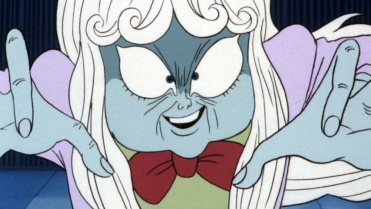 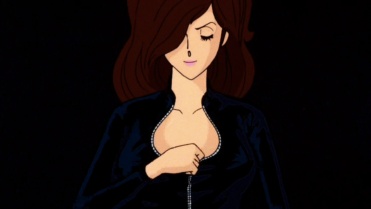 And there you have the simple set-up for one of the longest-lived characters in Japanese pop culture. Lupin the Third dominated manga and television for years before finally making the jump to a feature film, The Mystery of Mamo, in 1978. Since then, a whole slew of Lupin movies have been released, some better than others, all highly enjoyable if you are a fan of the series (some enjoyable even if you aren’t). Mystery of Mamo marks the first time Lupin appeared on the big screen (unless you count the live-action film, which I guess counts, so it’s the second time, but first in pure animated form), and coming hot on the heels of the revival of the television series in 1977, that meant that the movie was going to basically do everything the series did, only bigger and with more bared breasts. Lupin was snottier, the heists were crazier, and Fujiko was nakeder — what more could anyone ask for? How about knockout action setpieces, great animation, a funny script, and a plot that manages to be completely over-the-top weird yet somehow still manages to work in the world of Lupin, which was always grounded in reality — or at least the kind of reality that allows you to drive little European cars up the sides of mountains or down pyramids. 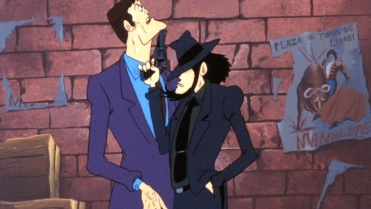 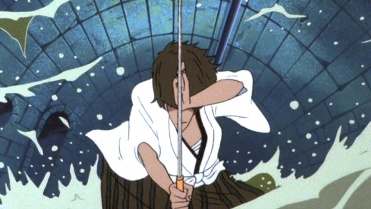 Mamo begins with the death of Lupin the Third, which comes as a major shock to Lupin the Third when he hears about it. This initial puzzler sends Lupin, Goemon, and Jigen on a wild quest that brings them face to face with the United States Navy and a mysterious, reclusive billionaire named Mamo, who happens to look like one of those freaky blue kids from Akira, only with bad “aging record label executive” hair and a lavender leisure suit worn with white platform shoes and a bow tie. One thing the Lupin franchise has always been is a challenging roadmap to high fashion. If you watch this movie then follow the advice doled out by Walt “Clyde” Frazier in Rockin’ Steady: A Guide to Basketball and Cool (sample: “I slap cologne all over my body — lookin’ good, smellin’ fine”), then you, too, will soon find yourself raiding pyramids and making time with busty cat burglars or suave international men of action.

Mamo, it turns out, is up to far more than setting fashion trends, and before the end of things, Lupin and crew will find themselves in a race to save the whole of human race from annihilation. Secret of Mamo crackles with fun and action. It’s every frame is infused with kinetic energy and a lusty gusto that makes the movie a ton of fun from beginning to end. The jokes are good, the action is spectacular, and the characters are expertly written and used. No real surprise there. With Monkey Punch’s brilliant original creations to work with, scriptwriters Atsushi Yamamoto and Soji Yoshikawa (also the director) had excellent source material. Yamamoto was already a highly regarded screenwriter, having penned the script for the outrageous, ground-breaking Seijun Suzuki-directed gangster film Branded to Kill in 1967 and the wild girl gang exploitation classic Stray Cat Rock: Sex Hunter from 1970 and starring exploitation film icon Meiko Kaji, best known for her role in Lady Snowblood, the live-action films based on the Kazuo Koike manga of the same name, and the Female Convict 701 Scorpion films. He also wrote and directed a 1967 film called Inflatable Sex Doll of the Wastelands, which is something I know nothing about — and I do sorely regret my ignorance. 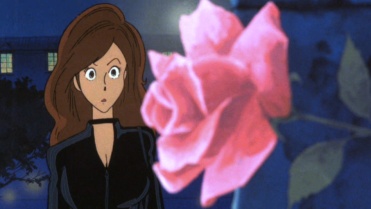 He was a screenwriter with one foot in the avant garde Japanese new wave and the other in sensational pulp exploitation. Stray Cat Rock was directed by one of our favorites, Yasuharu Hasebe, a protege of Seijun Suzuki and also the director of the trippy go-go spy adventure film Black Tight Killers, as well as the Female Convict films, Bloody Territories, and the old Spectreman series that only I seem to love. Obviously, he was a superb candidate for writing a big screen Lupin adventure, even though he’d had no real experience with anime. Despite being a cartoon, Lupin is a perfect fit with Yamamoto’s list of credits. It allows him to blend outrageous action, psychedelic art design, saucy sexploitation, and cutting-edge wit to a world brimming over with cool hitmen, boob-grabbing super-thieves, and insane Interpol agents, as well as a weird blue guy with Edgar Winter hair and white loafers. 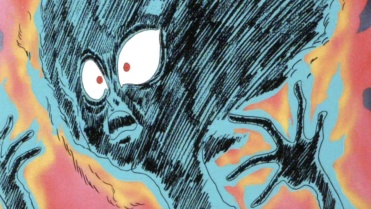 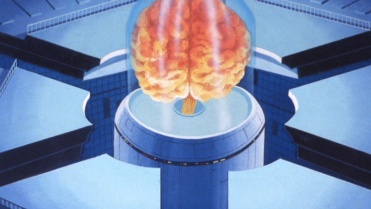 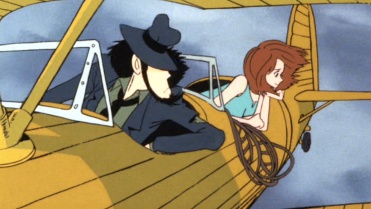 Equally inexperienced with anime — and inexperienced with just about all aspects of filmmaking — was director and co-writer Soji Yoshikawa. Mamo was his first — and apparently only — credit as a director, though he did go on to write scripts for Lensman and Armored Trooper Votoms during the eighties. His inexperience doesn’t show, though, as Mystery of Mamo is crisply directed and magnificently paced, taking full advantage of the inherent chances for action, tension, and comedy in every scenario. The world of Lupin is larger than life, and the team of Yamamoto and Yoshikawa work in perfect harmony with character designer Yuzo Aoki (a veteran of the Lupin television series) to breathe life into the brightly-colored world of ridiculously curvaceous dames and amusingly-contorted men. Lupin is all flailing limbs and flapping blazers, just as likely to run away screaming from a situation as he is to stand his ground and deliver a knock-out punch to some chump’s jaw. Fujiko — frequently unclothed during the film — seems like an obvious influence on other “hot thief with a heart of gold” characters — namely Cowboy Bebop’s Faye — and Lupin bears more than a few similarities with that same show’s Spike Speigal (they even have similar dress sense and footwear). Ditto Jigen and Jet, who sport similar bizarre facial hair and gruff attitudes. However, I don’t know that you’d really say stoic samurai throwback Goemon is especially similar to Ed.

The acting is uniformly top notch. They just hired all the same people who worked on the series, including Yasuo Yamada (Lupin), Kiyoshi Kobayashi (Jigen), Makio Inoue (who joined the Lupin series in 1977 as the voice of Goemon, replacing Chikao Otsuka), Eiko Masuyama (as Fujiko, also from the 1977 series, replacing Yukiko Nikaido — although it was Eiko who voiced Fujiko in the original promotional clip that was used to sell the series in 1971), and the venerable Goro Nayo as Inspector Zenigata. Obviously, each of these people is intimately acquainted with the character they inhabit, and the transition from television to the big screen is smooth and seamless. 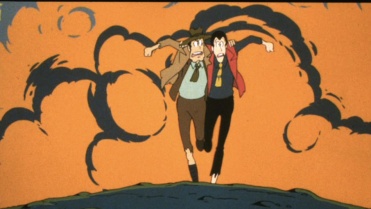 The English-language dub I heard (there are several) is also quite good. The voice actors for the Lupin series are, by this point, almost as familiar with the characters as the original Japanese cast. The English language cast includes Tony Oliver (who always does a superb job as Lupin), Richard Epcar as Jigen (now doing the English dub voice of Bato in Ghost in the Shell and also credited as directing the English-language version of Mamo), Michelle Ruff as Fujiko, Lex Lang as Goemon, and the hilarious James Martin as Zenigata (gotta admit I actually like his voicing of Zenigata more than the original Japanese). All of these people had experience dubbing the 1977 Lupin series, and although Mamo and Lupin came very in the careers of each performer, they’re all exceptional at their job (which is why they’re all still doing it). I generally prefer the original language, but truth be told, I have absolutely no problem listening to any of the above English language actors. They do a top notch job and have, in many was, become every bit as definitive a chorus of voices as the original actors.

Without a doubt, one of my favorite anime movies, and one of the high water marks for anime. It’s got action, jokes, insane escapes, plot twists galore, nudity, and a brash, snotty aesthetic that seems straight out of punk rock. Amazingly, things would get even better, although markedly different, just one year later when the second big screen Lupin adventure was brought to life.