It is logical, and it seemed easy enough, to begin a discussion of The Cat and the Canary with a discussion of the history of “old dark house” mysteries — those movies where a disparate and largely shifty group of people convene upon a mysterious old mansion and find themselves embroiled in — and probably accused of — either a murder or a theft. Lots of skulking, staring, and clutching hands appearing from behind curtains or the doors of hidden passages ensues. From the silent era to the end of the 1930s, there was a dizzying number of “old dark house” films produced. They were cheap to make, easy to write, and demanded little from the production company or the audience. At their worst, old dark house mysteries were harmlessly entertaining. Often they were much better than that. The formula was so adaptable that it could be grafted onto pretty much any type of movie. Even established series like the Bulldog Drummond and Charlie Chan movies fell back from time to time on the old dark house motif. From horror to comedy to crime to thriller, it was easy to crank out an old dark house version of the genre and keep everyone at least moderately satisfied. 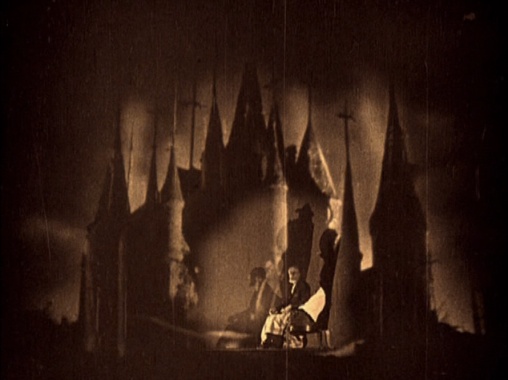 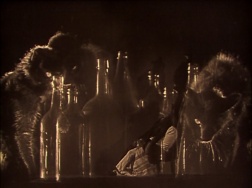 Unfortunately, tracing the lineage of the old dark house movie leads into the murky waters of low-budget moviemaking and lost films, which means proper records — let alone prints of the movies — become increasingly difficult to find the further back you go. So pinpointing the first “old dark house” movie is probably a study in folly. As soon as one assumes the mantle, another will rise up that has it bested by six months or a year. Similarly, skipping over film and onto the stage, where the old dark house mystery was born (ignoring for the time being literature, because I can only juggle so many chainsaws at once and lord knows how many old dark house penny dreadfuls were written), it quickly becomes impossible to decipher where it all began. So my lofty goal of sketching some sort of history of the genre collapsed on itself in mere minutes. Suffice it to say that the genre has been with us for a very long time. I’d be willing to put good money on there being some ancient Greek play in which a group of suspicious be-toga’d people find themselves together in an old temple on the outskirts of Athens, trying to figure out who is going to inherit old Aeimnestos’ fortune while a masked ne’er-do-well tries to kill them off one by one. 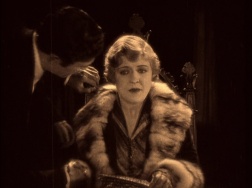 To scale back ambition, then, let’s concentrate on the task at hand. The Cat and the Canary began life as a play, staged in 1922 and written by John Willard. It was a big success, so it was natural that it would be adapted into a film. The task fell upon director Paul Leni, a veteran of the early days of German Expressionist film making and director of one of the great classics of silent era horror, Waxworks. Well, he was the director of several classics of silent era horror, but as of 1927, when The Cat and the Canary was being made, it was Waxworks. Leni relocated to the United States and before too long found himself helming Universal’s adaptation of The Cat and the Canary. Under normal circumstances, a parlor room whodunit such as this would have been a fairly simple affair — a living room/study set, a bedroom, a couple shots of the spooky exterior of a mansion to establish the place and mood. Sprinkle some cobwebs and shots of people looking sideways at one another, and there you go. Even in 1927, that was well-worn formula. In the hands of a German Expressionist like Leni however, things were going to be different

From the get-go, things are weird — but that’s not surprising if you have seen a few silent films. Everyone was still figuring out what they could do in this new medium, so tricks and experiments and bold ideas tended to crowd into even the simplest of movies. You will notice that whenever technology takes a leap forward — from still photography to silent film, from silent film to talkies, then on to color and Cinemascope — the potentials of the new medium are almost always explored to their fullest by horror, spectacle, and adventure films. It is in these disreputable cinematic ghettos that cinema is defined and explored. Horror was particularly important during the silent era of film. Leni almost immediately sets himself apart as not someone who is experimenting and trying to figure things out, but as a man who already understands the emerging language of film, its potential, and how to use the tricks of the trade to great effect.

When first we meet cranky old millionaire Cyrus West, he is a tiny man wandering amongst giant bottles and being menaced by a cat. he explains that for years he has endured the jackal-like scavenging of his greedy relatives, who want nothing more than to get their clutching hands on the old man’s money. He has the last laugh, however, when he passes away and his relatives discover that his will simply says that he will not name his benefactor for another twenty years. Twenty years later, what is left of his family convenes upon Cyrus’ spooky old mansion to hear the reading of the actual will and find out who gets the loot. It’s the usual cast of shifty-eyed whodunit family members — the slickster, the greedy aunt and her airhead daughter, the boring guy, the slapstick goofball in Harold Lloyd glasses (Creighton Hale), and kindly young Annabelle West (Laura La Plante) who just wants to be a good person.

Glowering at them all is the mansion’s sole resident for the past twenty years: stern-faced, unsmiling Mammy Pleasant (Martha Mattox). The mystery isn’t who gets the money — that is taken care of quickly. The mystery pops up when the lawyer gets murdered, a necklace is stolen from Annabelle, and a constable shows up to warn everyone that a lunatic has escaped from the local asylum. And, of course, there’s a powerful storm about the shake the world. One of the provisions of Annabelle’s inheritance is that she show no signs of madness — but these disappearing lawyers and visions of a menacing spook might be signs of insanity, a conclusion the rest of the family is all too happy to foster if it means the money might fall out of her hands and into theirs. 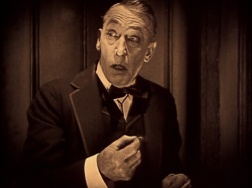 I find that the fun in mysteries isn’t always the whodunit aspect, especially with a film like The Cat and the Canary which, while perhaps surprising at the time of its release, has for so long served as the template for this type of movie that going back and viewing it in retrospect means that it’s all fairly obvious. Burdened as we are from our vantage point in the 21st century with almost ninety years of copycats, one must hope that a film such as this has more to offer than a last-scene “it was that guy!” revelation. The Cat and the Canary, luckily, has plenty to offer besides the central mystery. For starters, this is as much a comedy as it is a mystery film — perhaps more so a comedy — and it succeeds at being sharp and witty. Most of the comedy is shouldered by cowardly goofball turned unlikely protector Creighton Hale, and while he plays the comedy a bit broad — as was the style at the time — he’s practically subtle by silent film comedy standards. Assisting him with the comedy is the least funny character of the bunch. Ironically named Mammy Pleasant drifts through the entire film with a permanent scowl on her face, popping up from time to time to loom and look on in disdain. She must have been the template for all the creepy, disapproving caretakers who would follow, and she’s wonderful.

The rest of the cast is similarly more naturalistic in their acting. They play their roles well and without going overboard. They are all a bit on the greedy and slimy side, but not broadly so, and not so much that you can actually grow to hate any of them. Since we will be spending a lot of time in the same rooms as the cast, it’s nice not to find them totally irritating. And heck, the most unrepentantly greedy of the bunch is the one who gets the best redemptive scene, wildly riding to the rescue atop a phalanx of police carriages and ice cream trucks. It also makes the central mystery a bit harder to guess, since it really could be anyone. As the sweet-natured heir to the fortune, Laura La Plante is funny and charismatic. I absolutely adore the woman. She also has a fabulous “fear face.” She’d been in the movie business almost since the beginning, and her seven or eight years of screen acting experience made her as close to a veteran as you could have in 1927. A shame she didn’t do more straight horror — she would have been great at it.

What really makes The Cat and the Canary an enduring piece of entertainment no matter how well-worn the formula may have become is the way in which Paul Leni stages it. The photography and set production is gorgeous. Even though these old dark house movies don’t call for much and can be small-scale, Leni shoots hallways to appear vast and cavernous, lined by billowing curtains and menacing shadows. Scenes of ominous Mammy Pleasant walking down such hallways, tiny and black against the sets, are easy reminders of Leni’s time as part of the Expressionist movement in Germany. At the same time, other scenes are impossibly claustrophobic, shrinking in on poor Annabelle as she gets a taste of what a miserable, oppressive life Cyrus must have led as “a canary surrounded by these cats.” Many silent films look like filmed stage plays — because that’s often what they were, as the language of film itself was still being born. But even though The Cat and the Canary started life on stage, Leni’s screen adaptation does not have the closed, static feel of a filmed play. It looks and feels like a movie.

As with the mystery itself being softened by decades of imitation, so too might it be easy to overlook what technical and stylistic accomplishment Leni displays with this film. In its use of more natural realistic acting, its use of images to convey plot points and ideas, its blending of genres — The Cat and the Canary turns out to be a surprisingly important little film in the development of cinema history. Of course, we all know that “important” isn’t always the same thing as “entertaining,” but The Cat and the Canary manages to be both. It’s never too spooky, never too goofy, and has no interest in slowing down to take a breath. While it may be too light to be taken seriously as a horror film, as a smirking thriller it’s a joy to watch. Menacing hands, disappearing corpses, madness, lunatics on the loose, sinister caretakers, cobwebs, hijinks — that’s about as perfect a slice of breezy late-night fun as you could hope for.