This is another one of those fragmented movie memories for me, where the only thing I could remember about it was “Amanda Pays turns into a fish” — and even that I eventually convinced myself happened in Leviathan. But when I rewatched Leviathan and discovered that Amanda Pays does not turn into a fish at any point, protected as she was by the power of Peter Weller’s rolled bandana headband, I knew I had to figure out which film it was where she did turn into a fish. Luckily, you type “Amanda Pays turns” into Google, and the first auto-complete that comes up is “Amanda Pays turns into a fish.” Internet, you are truly a good friend. So anyway, it turns out it was The Kindred, and since I was on a fishy underwater monster movie kick and couldn’t remember anything about this one, I decided to track it down (surprisingly difficult) and see what else happens besides the woman who dated both The Flash and Max Headroom turning into a fish. Turns out not much. 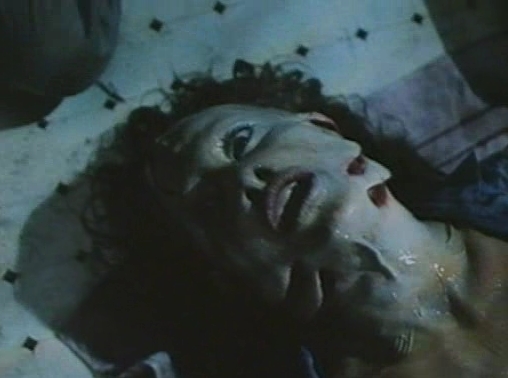 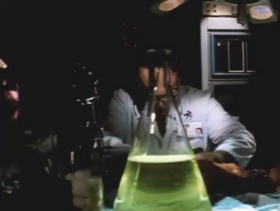 Despite that whole lead in, this isn’t one of the many underwater Alien rip-offs that popped up in the late 1980s. It’s more along the lines of all those movies about freaky babies and genetic mutations that popped up, with a dash of HP Lovecraft perhaps thanks to everything revolving around slimy marine life. In the hands of someone like Stuart Gordon or his sometimes Lovecraft adaptation partner Brian Yuzna, this movie probably could have been a lot of fun. Unfortunately, co-directors Jeff Obrow and Stephen Carpenter (who also co-directed The Dorm That Dripped Blood) never really get things going, making most of the movie a murky, somewhat predictable mess until things finally liven up a bit in the end. The road to that end begins with an ailing scientist (Planet of the Apes‘ Kim Hunter) who, upon coming out of a coma, demands that her son John (David Allen Brooks) go to her house and destroy all her notes, finding time to also rant about a mysterious experiment and how some strange character named “Anthony” — John’s brother — is still alive. The only problem: John doesn’t have a brother. 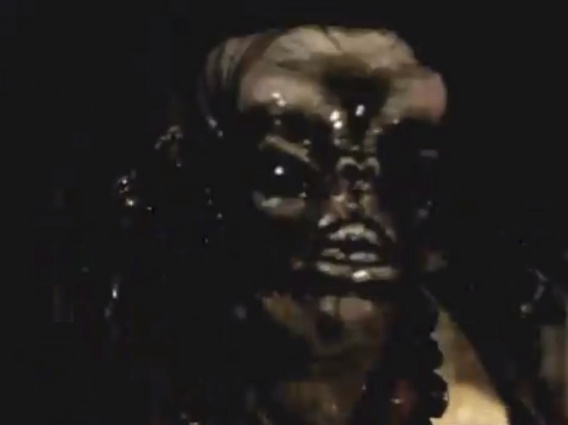 Meanwhile, her creepy former research partner (Rod Steiger), is into some weird Frankenstein nonsense with collecting dead bodies and maybe re-animating them into crazy ghoul types. Or something. Anyway, it seems like Rod might know something about this mysterious experiment and “Anthony” — but since he’s the nefarious type, all Steiger sees is a chance to use her research to augment his own schemes. He goes and does his threatening Rod Steiger thing to John’s mom in an effort to pressure her into giving him info on her abominable breakthrough, but that just ends in her death. Not one for the gentle touch, is Rod Steiger. At her funeral, John is approached by grad student Melissa (Amanda Pays), who was a great admirer of John’s mother and gets invited to drive up with John and his pals to the country home, because nothing’s more fun than piling into a car after your mom’s funeral to head up to her house with your friends and burn her apparently horrifying research notes.

While John and his girlfriend (Talia Balsam, Martin’s daughter) poke around the old house, we get to learn that something mean is creeping around, eating the occasional dog. Melissa shows up and, rather than helping catalog and store equipment, starts digging deeper into it. John’s friends are the usual “get ’em together and kill ’em off” goofballs from 80s horror, more interested in getting laid and being silly than they are in taking care of the rooms full of strange scientific equipment. And sure enough, the elusive Anthony shows up to start killing them off, starting with the tarot chick as she’s driving home, and somehow the slimy tentacled creature secreted himself away in the…umm, I think it’s her lucky watermelon or something. Anyway, the monster is in the watermelon somehow. Meanwhile, John discovers that his mother was working on some sort of hybridization of marine animals, and the Anthony to which she referred is the slightly murderous tentacle creature we’ve learned is so fond of watermelons. It isn’t until another of John’s friends is attacked by the monster that they have a chance to figure out what they’re dealing with — except that Melissa seems intent on hiding the truth from everyone else. 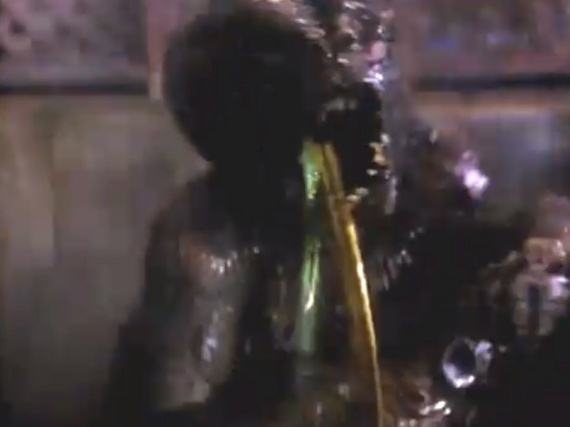 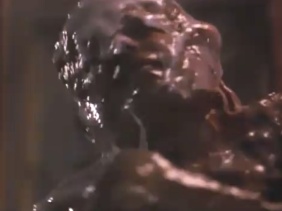 In most aspects, The Kindred is a solid if slightly middle-of-the-road horror film that is surprisingly restrained for its time (none of the mean-spirited gore and gratuitous nudity that defined the horror genre during the 1980s). The acting is good, the special effects are decent, and the monster is all right. But the overall thing falls a bit flat for me because it’s so predictable. You can either make your movie suspenseful, or you can spoil all the suspense but make the movie fun enough that the suspense and surprises don’t matter. The Kindred does neither. The answer to the central mystery is glaringly obvious, but the movie plods along as if the big reveal is still going to be shocking. We know Anthony is going to be a slimy monster in the basement. We know Amanda Pays is up to something shady. We know Anthony is a hybrid of John and some form of marine life — but the movie stubbornly handles each of these plot threads as if we’re on the edge of our seats waiting for them to be explained.

Luckily, the movie is short enough that while the unraveling of the plot drags, it doesn’t drag long enough to totally sink the film. At ninety-one minutes — the amount of time a horror movie should run (that modern horror and action films feel the need to be 140 minutes long is a travesty) — it can only waste so much time poking around in dark corners before it trots out the finale. And that finale is pretty full of tentacles, slime, backed up plumbing, and off-screen props assistants throwing squishy little monster puppets at the cast. And then, yes, Amanda Pays turns into a fish and Rod Steiger shows up with a shotgun to scream at everyone. It’s all pretty fun and worth muddling through the first half of the film. If it had maintained that level of energy throughout, or been weirder and quirkier in the first half, The Kindred could have been a classic, or at least as much of a classic as a movie like From Beyond. As it is, The Kindred is half of a really fun horror movie. 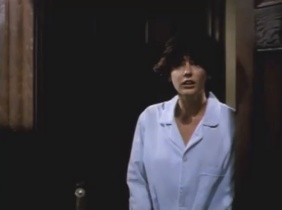 What makes the first half watchable even if it’s kind of predictable and boring is that the cast is pretty good. Other than Steiger and Hunter, both of whom only have cameo roles, no one in this movie is particularly high profile. Amanda Pays had a decent career in the latter half of the 1980s, most famously with big parts in the movie Leviathan and the television shows The Flash and Max Headroom, but The Kindred finds her more or less at the start of things — and even at her biggest, she still wasn’t a household name. Kind of a shame. I really like her. The role here is a bit subdued, not overly demanding. well, until she turns into a fish. But she does a pretty job with things. Everyone else is mostly from or went on to television work, with the most recognizable face being Timothy Gibbs and his amazing eyebrows, though I think Timothy Gibbs is most recognizable as a I guy I constantly mistakenly think is Robert Rusler. Still, everyone seems natural and comfortable on screen, and the stiff, wooden acting that usually plagues low-budget horror films isn’t evident here.

I invoked the name of HP Lovecraft earlier, which then led to me thinking about how much fun this movie would have been if directed by Stuart Gordon (The Reanimator, Dagon) or Brian Yuzna (Beneath Still Waters, Beyond Reanimator). Lovecraft, perhaps because of his New England upbringing, had a fixation with marine life as the model for his assorted creepies and crawlies. Most obviously, there’s The Shadow Over Innsmouth, which is about a town populated by fish-human hybrids (and is a thinly veiled anti-race mixing tale, but let’s leave that for another discussion). but even when his stories were set in the middle of the New Hampshire mountains, Lovecraft often made his monsters decidedly aquatic-like: frogs, crabs, squid, so on and so forth. The Kindred has nothing to do with any Lovecraft story of which I know, but it really would have fit in perfectly: the fishy tentacle monster, the mixing of human and animal, the remote farmhouse, the mad science. If I dropped it into a list of Lovecraft adaptations, I think most people would be none the wiser. 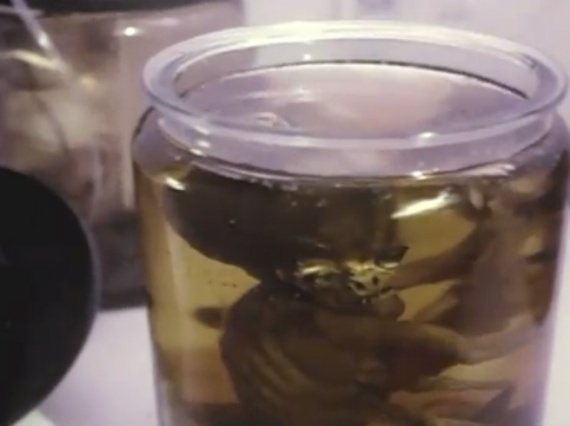 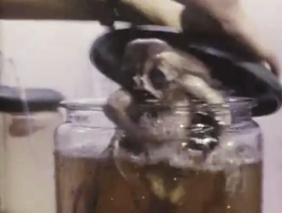 The other inspiration for The Kindred, I think, were the “creepy mutant baby” movies like It’s Alive, which probably can trace their roots back to devil baby movies like Rosemary’s Baby — with the modern twist being that instead of drawing on the Satanism scare of the early 1970s, they rely on the genetic engineering scare of the later 1970s into the 1980s. There’s also a dash of Alien in things, and like all monster movies that came in its wake, the monster(s) in The Kindred love to drip, drool, and otherwise be covered in mucousy slime. And for some reason, every time a character encounters a puddle of this slime, they do what people in these movies always do — they dip their fingers into it and either stare at or sniff it. Who the hell would do that? I live in New York, and in a city like this you just have to deal with the fact that every now and then you’re going to encounter some weird goo. And you know what i never feel? The urge to dip my finger into it and go, “Hmmm, what could this be?” But in movies, every damn time a character stumbles upon a blob of goo…in go the fingers. And hell, even if I accidentally get unidentified goo on my hand, I don’t stare at it or sniff it.

Whew. Glad I finally got that off my chest. Anyway, slime sniffing aside, it’s a shame The Kindred has lapsed into obscurity. It’s a flawed film, front-loaded with some pacing issues that build tedium more than tension. But the pay-off for your patience is worth it, and in the end, despite the negative comments I’ve thrown in the direction of this movie, I enjoyed it. In a field of increasingly over-the-top and absurd slasher films, The Kindred ended up being a nice throwback to more patient, lower key horror films — or as low key as getting infected with mutant fish DNA and turning into a slimy monster can be. And it does get pretty gross at the end, with plenty of exploding monster eyes and tentacles spurting goo all over Rod Steiger.