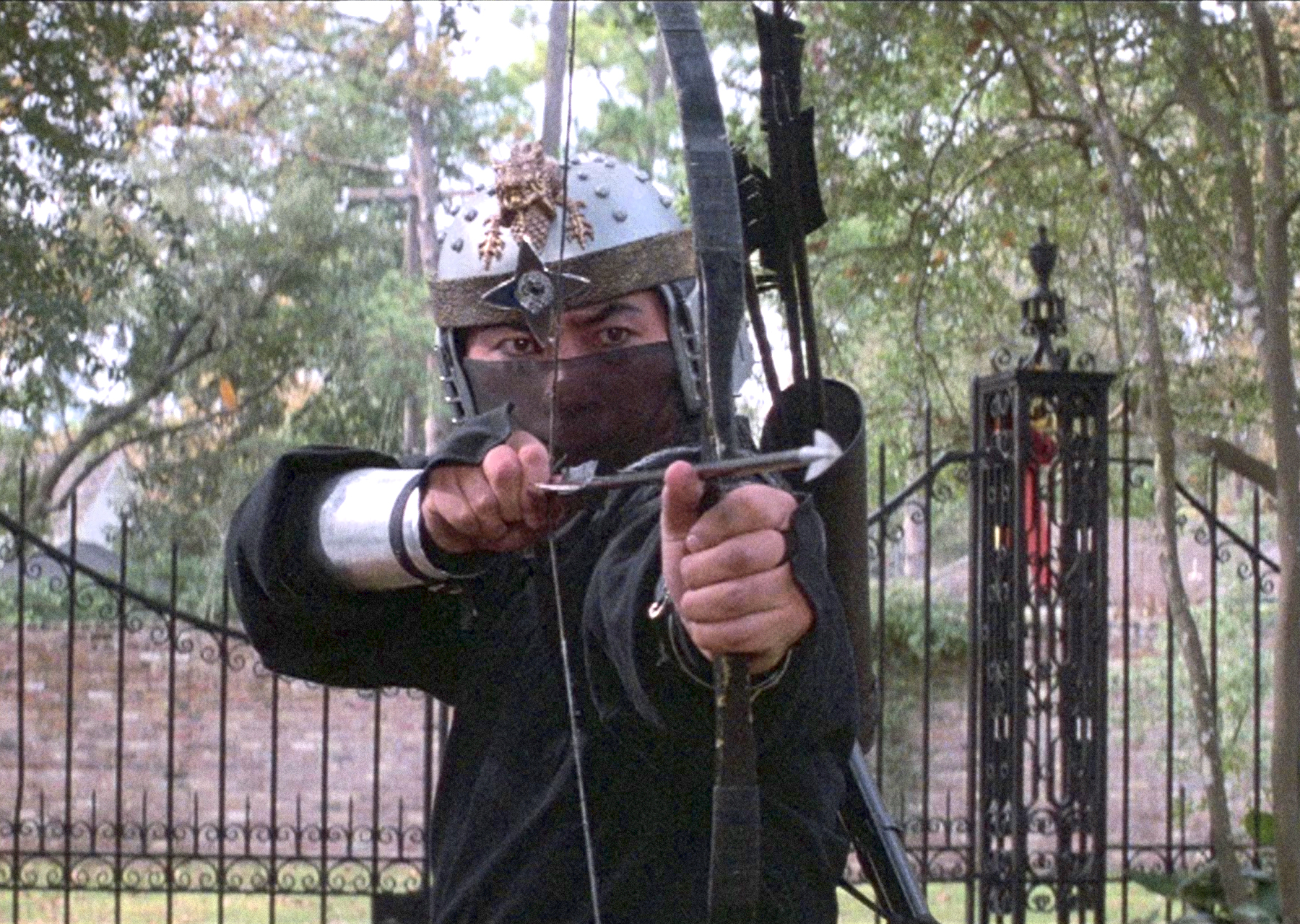 Just when you thought America’s cities were getting safer, you leave the house to walk down to the corner bodega and catch sight of a bunch of cops fighting with a ninja. It’s more than likely that at some point the ninja throws down an eggshell grenade and disappears into a puff of red smoke. Or maybe you stumble upon a couple of ninjas all fighting each other in the middle of Main Street, USA. It may sound weird to our modern ears, but back in the 1980s, this is how things were. America’s cities were infested with ninjas, usually wearing the traditional black ninja suit, but sometimes also wearing shiny gold, red, green, or purple outfits. The urban ninja is not above a fashion statement, after all. Statistics estimate that in the early- to mid-1980s, for every thousand cockroaches in a city, there were also five ninjas.

With so many ninjas doing backflips down Broadway or scaling our gleaming skyscrapers, it was only a matter of time before they started organizing and demanding recognition and certain rights that the rest of us take for granted. The urban ninja movement was championed by one man. One man who mysteriously appeared when the ninjas became a noticeable force. One man who, like his brothers and sisters in ninjitsu, disappeared just as mysteriously. One man who, from time to time, could be seen hosting his own martial arts workout show complete with a team of skimpily-clad “ninjettes.” The man was Sho Kosugi.

Yes, in the 1980s, this man crapped ninja movies with the regularity of an octogenarian addicted to bran muffins and bean soda. Usually, the results were about the same. However, he did manage to squeeze out a few decent films amid the flurry of nonsense for which we love him so dearly. Kosugi first came to national prominence with Enter the Ninja, starring Italian action star Franco Nero as the first white ninja. Sho played the bad guy in that one. Kosugi’s best film was his next one, Revenge of the Ninja, and he must have felt the same way, because that’s the film he chose to make again, calling it Pray for Death. The plots are almost identical, though Kosugi’s ninja suit is much sillier in this film, composed of a metal helmet with chain link face cover. Not exactly the best apparel for slinking around in the shadows and doing back flips, but it beats the shiny gold suits some ninjas got.

Since Pray for Death rips off Kosugi’s best film, it can’t help but be at least sorta decent. And that’s just what it is. Kosugi reprises his role as a Japanese immigrant to the United States. He has a shady past as a ninja, obviously, but these days he is committed to putting his demons behind him and being a man of peace. Kosugi’s life in America is good. He has a happy family (including his real sons, Shane and Kane, as was the law) and a nice house. Unfortunately, the house he bought is a former drop-off and pick-up point for the local crime ring, whose main enforcer is some British guy named Limehouse Willie (James Booth). Always having mobsters sneaking around his property makes Sho suspicious, and eventually he crosses them. They take revenge by attacking his family. The man of peace is once again forced to return to his violent past, don his goofy helmet, and chop the shit out of the men who wronged his family.

This movie has everything you would expect from a Sho Kosugi ninja movie. Kane is picked on by the neighborhood kids and must kick their asses. Also, any movie that stars a little martial arts kid is required to have scenes in which he runs through the bad guys’ legs and either kicks or headbutts the thugs in the balls. Satisfyingly, Kane Kosugi delivers on all counts. The villains are all over the top, just as they should be. The only thing hurting this movie is what hurts any martial arts film about masters kicking ass on American thugs: there’s no real competition. Sure, Limehouse Willie is a big lug who gets some ham-fisted blows in, but for the most part, without this gang being able to call in their own ninja like the gang in Revenge of the Ninja, it’s pretty much Sho all the way. In general, when gambling on fights like this, one should always put their chips on the pissed off master ninja rather than on the bumbling thugs who shot the ninja’s wife. A little advice on games of chance involving ninjas, just in case it ever comes up.

With no viable opponents to provide cool martial arts scenes, most of the action involves Sho jumping, slicing, and being shot at. It’s all pretty good stuff. But this film is historic in exactly the opposite way Enter the Ninja was historic. Enter the Ninja was the beginning of the whole trend and marked the point at which Sho Kosugi’s career was born. Pray for Death is pretty much the American ninja film’s last hurrah, and Sho Kosugi dropped off the radar shortly after its release.

Plenty of other American ninja movies were made after Pray for Death, but none of them were part of the heyday of ninja films. None of them got to play in actual movie theaters like this and Sho’s films. After Pray for Death, the ninja movement in America was dead, relegated to the direct-to-video realm in which so many movies thrive. Sho’s career as a leading man had to end at some point, and at least he managed to deliver an enjoyable, if ludicrous (and aren’t they all), “final” film. Of course, he would stretch the ninja line as much as possible, appearing as a host on late night movies, video releases, and of course, as the instructor in those workout videos with the Ninjettes.

I really miss the aspect of the 1980s that saw low budget weirdness in mainstream theaters. You don’t see films like Pray for Death these days. Big budget blockbusters are so busy being inane and awful that there’s no room left for goofy little lowbrow pleasures like ninja or barbarian films. It’s sad, this passing of an era. It’s sad, this loss of the days when ninjas roamed the streets of our cities. It’s sad, this passing of the era of true bad film, of nights spent sneaking peaks at it on late night cable television after the parents had gone to sleep.

I’m sure we shall one day return to this simpler, more enjoyable time. A man shall arise to lead us away from the glitz and glamour of billion dollar movies and back into the promised land of small, simple, enjoyable bad film, preferably peppered with nudity and ninjas and little kids whacking big fat guys in the balls. One man will emerge to champion the cause, to serve as the face of hope in these trying times. One man shall deliver us back to the days when films like Pray for Death and Krull and Metalstorm: The Destruction of Jared Syn graced our movie theaters. One man will teach us how to once again love movies centered around ninjas or “space cowboys.”

And I think that man will be Sho Kosugi.