Sometimes, real life events contribute to the effectiveness of an on-screen story. A tremendous act of synchronicity results in the alignment of elements, each one falling into place so perfectly that it could never be orchestrated by anything but nature itself. Such is the case with the mini-flood of ninja movies during the 1980s, and the life of the star of most of the movies, a man named Sho Kosugi. No one had heard of Sho Kosugi, but when the ninja craze hit American shores, he suddenly stepped out of the shadows and into the limelight, bringing to our attention the secret tactics and lives of the mysterious warriors known as ninja. When the craze finally died out, Sho Kosugi vanished back into the shadows without a trace. Some said he went into hiding, pursued by an ancient sect of ninja who wanted to kill him for divulging their secrets to the world. Some say that to this very day he is kicked back and living the good life in some secret mansion alongside Bruce Lee, also in hiding from those who would seek to murder him.

Whatever the case may be, there is no denying that Sho Kosugi’s mysterious past, present, and future, contributed to the mystique of the ninja movie. And though his son, Kane, carries on the tradition of Kosugi family members starring in sub-par martial arts films, he does not wield the power or command the respect his father did. Sho Kosugi was an Asian bad-ass in America when there were no Asian bad-asses. Bruce Lee had passed on and wouldn’t enjoy a revival until the 1990s. Sammo Hung and Jackie Chan were busy kicking ass over in Hong Kong, but their wild exploits were all but non-existent if you were living in America. No, the best we had over here was Chuck Norris, donning the traditional martial arts garb of a cowboy hat, cowboy boots, some rawhide vest, and of course, Chuck Norris brand karate stretch jeans, as advertised in early 1980s copies of Inside Kungfu.

When the notorious production team of Golan and Globus decided they wanted to make a film about ninjas, they called upon Sho Kosugi to be the heavy. For some reason, Italian movie star Franco Nero was cast as the hero. He’s best known for his role as Django, the cowboy who wanders the old west with a coffin in tow. That’s cool and all, but how he got to don a white ninja outfit and have a stunt double jump around, who knows? Well, lots of people know. The film was Enter the Ninja. Suffice it to say that audiences were wowed by the zany ninja antics, a trend was born, and no one gave a damn about Franco Nero. They did, however, dig Sho Kosugi. So when Golan and Globus decided to milk the genre for all it was worth and make another ninja film, they called on Sho Kosugi to play the lead. This was at a time when Asian men were reduced to playing ass grabbers (Kinjite: Forbidden Subjects) and seedy criminals (Year of the Dragon). Even black heroes had fallen by the wayside. The 1980s were the era of big white heroes, and the days of Bruce Lee and Fred Williamson were gone. 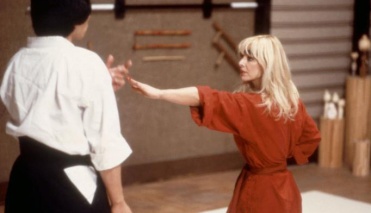 So it was a big deal to have Sho Kosugi storm the party and lend a non-white face to violent, heroic derring-do. Although he was still fulfilling a stereotype (martial arts bad-ass), you gotta admit that’s not a bad stereotype to have. It’s better than most. He fulfilled a more important role though, that had been vacated with the death of black action films and the gentrification of kungfu films. He was a non-white hero kicking ass in a predominantly white world. It’s no wonder Sho and the ninja films were embraced so whole-heartedly. For anyone who couldn’t relate to the time-hopping exploits of Michael J. Fox or the sweaty machismo of Rambo, Sho Kosugi was all they had.

Incidentally, there are a lot of big dumb-asses with guns in Revenge of the Ninja. It has nothing to do with Enter the Ninja, other than having ninjas all over the place. During the 1980s, you could actually see more ninjas running around in broad daylight in downtown LA than you saw at night during the middle ages in Japan. In the case of Sho Kosugi, he is a former ninja (I didn’t know there were such thing — do you get a good 401k as a retired ninja?) who moves to Los Angeles to run an antique shop with his friend. What he doesn’t know is that his friend is using the antiques as a way to smuggle dope. As more and more thugs start hanging around the shop, Sho starts to catch on that something is up. In order to stop his firestorm of ninja powers, the dope smuggling gangsters kidnap Sho’s son (played by his real son, Kane). So let me get this straight — you have this ninja who you’ve pissed off. And the best thing you can come up with to make him stop hassling you is to kidnap his son? Why would you kidnap a ninja’s son? Don’t they know that will just piss him off more and make him do even more flips than ever before? 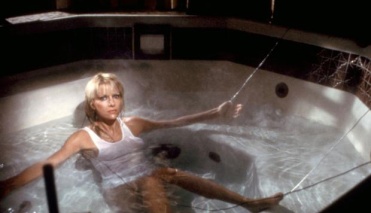 Another ninja is called in to kill Sho Kosugi after the shit hits the fan. Mobsters are getting slashed left and right as Sho seeks revenge. Despite ostensibly working for them, the rival ninja doesn’t seem particularly interested in saving mobsters, though he is really keen on killing Sho Kosugi. Big surprise when the other ninja turns out to be Sho’s friend. What was he expecting? I would imagine the society of ninjas is pretty small, even on a global scale, so you get to know all the other ninjas after a while. The finale has Sho and the other ninja storming a high-rise that has been fortified by the mobsters. They kill lots of gun-toting toadies before finally facing off on the roof.

I really like Revenge of the Ninja. I remember the first time I saw it. I was at my grandparent’s house for the weekend. They just got cable TV, and I was up late watching HBO, hoping to catch a glimpse of some breasts or something (right…”or something”). Revenge of the Ninja gave me that and so much more. I was going wild, and although I didn’t go out and buy a headband that said “Ninja” on it in that jagged “oriental” typeface, I was definitely hooked on gory ninja films as much as I was on gory kungfu films. Revenge of the Ninja is tons of fun, with a tremendous body count, fountains of blood, cheap 1980s sex scenes, Kane Kosugi kicking ass on gangsters, Sho Kosugi kicking ass on gangsters, dueling ninjas, and pretty much everything else a boy could ask for. And the bag o’ ninja tricks each ninja has is more fun than any of that James Bond gadgetry.

Sho Kosugi is a fun hero — the man of peace pushed too far. We don’t see too many of those these days, but they were always my favorite. These days, everyone is all to ready to duke it out and go to war, but Sho demonstrated restraint. Even when faced with physical violence against himself, he held back, partly because he didn’t want to reveal that he was a ninja (as if kicking someone’s ass would make them automatically go, “Shit, that dude must be a ninja!”), but mostly because he believed in peace. Violence was always the final, tragic solution, but when he resigned himself to it, he sure didn’t hold back.