Since the day Tony Jaa, Prachya Pinkaew, and Panna Rittikrai suddenly popped up on fight film fans’ radars, Thailand has become the go-to place for the hyperactive, bone-jarring, stunt filled, totally ridiculous style of film making that defined the Hong Kong action film industry in the 1980s. The arrival of Thailand on the martial arts movie scene was a breath of fresh air, or if not fresh air, it was at least a second wind that gave us hope in a time when Hong Kong action cinema was basically dead, and the only place cranking out halfway decent action films was, weirdly enough, France. Ong Bak was like a long lost star quarterback showing up to save his team in the final minutes of a big game, and we rejoiced. What was even better was that Jaa’s success spawned a bunch of imitators in his native Thailand and seemed to light a fire under the ass of Hong Kong film makers, inspiring them to maybe think about making fun movies again.

As was the case in Hong Kong twenty years ago, for every high profile star the caliber of Jaa or Jeeja Yanin, there are a dozen lesser knowns doing their best to out-Jaa Tony. Most of the time, they fall short in terms of the quality of stunts and action, but if you aim high, you can come up short and still be pretty fantastic. And while the scripts in the higher profile movies are usually, at best, completely daft, the scripts in the lower profile films are are so bonkers that they become some twisted zen koan or something. Case in point is Fireball, a movie about the high stakes world of full contact, to the death, muay thai basketball lorded over by organized crime bosses whose status among the ranks of the criminal underworld seems tied less to how they run their criminal ventures and instead is entirely dependent upon how well their fireball team does. 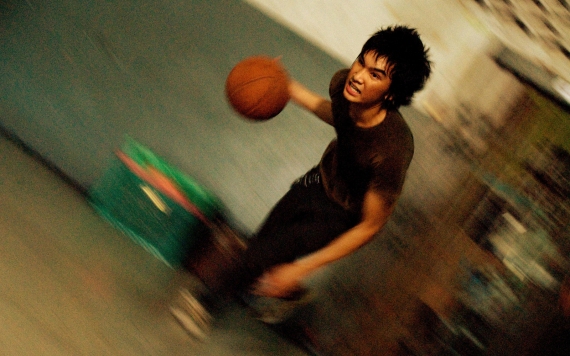 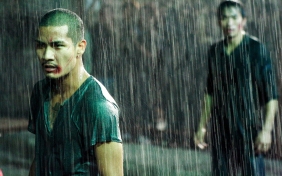 Thai rocker turned surprisingly decent actor Preeti Barameeanant stars as twins brothers Tai and Tan. Tan was previously involved in the mysterious underground sport of fireball, until a particularly brutal game left him in a coma and badly in need of an operation for which his girlfriend (Khanutra Chuchuaysuwan) obviously cannot pay. Enter his fresh out of prison street tough twin brother, Tai, whom apparently no one in the world knew existed. In order to avenge his brother’s assault and earn enough money to pay for Tan’s operation, Tai assumes his brother’s identity and infiltrates the fireball organization. He joins a team of scrappy upstarts managed by a mid-level gangster who sees a successful fireball team as his ticket to the criminal big time. Needless to say, some fireball teams are more brutal and evil than others. Tai’s team must battle their way through a single elimination tournament that ends with a to-the-death game that takes up an entire industrial dockyard.

The plot and the sport are the sorts of things that exist only in and solely for the benefit of really dumb, hilariously entertaining action films. The structure of the fireball “economy” makes almost no sense at all, and the rules of the game change from scene to scene. The basic format: first team to score a basket is the winner. If you are looking for some serious basketball action, well, you were pretty stupid to come to a movie like this, weren’t you? The fundamentals of basketball are, at best, given little attention during team practice sessions. Every now and then, a guy dribbles the ball for a little bit, until someone knees him in the face. Any concern you might have over double dribbles, walking, and goal tending are best left checked at the gate. Hell, sometimes, the ball seems to disappear entirely for minutes at a time. 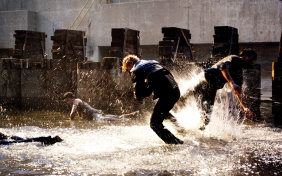 However, if like me, the thing that irritates you most about basketball is that even the lightest of incidental contact results in a stoppage of play and a foul, then perhaps fireball’s slight revision of the rules will appeal to you. It’s like if the Harlem Globetrotters took the court and, instead of throwing a bucket of confetti on the New Jersey Generals’ point guard, just shoved a rusty nail into his eye socket then beat on him with brass knuckles for a few minutes. The brutality of the game is escalated as Tai and his teammates advance through the tournament, starting off with people just beating the shit out of each other, advancing to lead pipes, and culminating in a totally nutso finale where even chainsaws are not outside the bounds of fair play. Through it all, the primary thing you’ll wonder is, “why the fuck would anyone agree to play this sport?”

For a movie this stupid, Fireball does a surprising number of things well. For starters, the cast is pretty good, even though most of them are inexperienced non-actors. You can’t really fault a guy whose character name is Zing and whose real name is 9 Million Sam. 9 Million Sam! All of the young stars are pretty good, bringing a nice mix of hotness, physicality, and natural charisma to their cardboard characters. I don’t know much about Preeti Barameeanant’s rock career other than his band is named Clash, but he pulls off imposing street thug bad-ass with surprisingly skill. Each of his fireball teammates is given just enough of a back story to make you actually give a crap about what happens to them, even though the backgrounds are predictably generic. While the end result may not be anything revelatory or especially good, I appreciate the fact that the screenwriters at least tried to make their characters into actual characters. 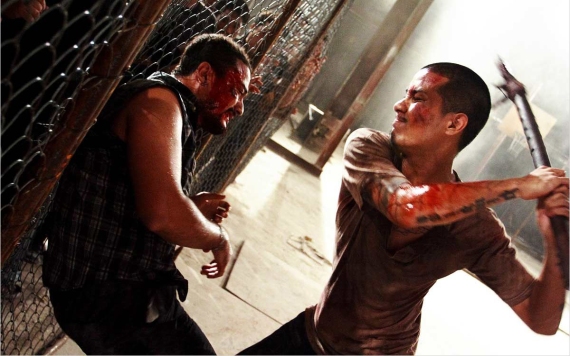 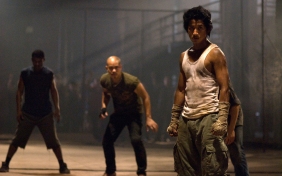 Plus, I love the moral this film teaches us. Not to spoil anything — presuming a movie like Fireball could be spoiled — but Tai’s sacrifice, everything he suffers and does for his comatose brother, eventually succeeds in getting Tan the operation he needs. And upon learning of the horrible sacrifices both Tai and Pang have made to help him (after all, when a woman in an action film needs money, her only option for getting it is to become a prostitute), what does Tan do with his new lease on life? Leave the city, care for Pang, start a new life far from the violence and degradation of the fireball world? No. He uses his second chance at life to murder every asshole who ever pissed him off. Hooray! Fireball teaches us the valuable lesson that you shouldn’t try to solve your problems by competing in a brutal and dehumanizing bloodsport tournament; you should solve your problems by shooting suckers in the face.

Ultimately, though, a movie like this lives and dies by its action scenes, and while everyone gives it their all, and while the scenarios are suitably loony, director Thanakorn Pongsuwan shoots all of the fights scenes layered with excessive camera tricks, then inflicts hyperactive editing and an overabundance of CGI to create an indecipherable mess. It’s a damn shame to see so many actors and stuntmen giving their all, putting their bodies on the line, then having the end results rendered as a jittery, impossible to watch pile of nonsense just because the director and editor think that makes movies more exciting. What’s there beneath the disastrous post-production finagling looks to be decent. Not “oh my God, this is the greatest fight scene ever” good, but definitely solid, gory, outlandish action (the amount of fists to the face, broken bones, and pipes through the chest that a fireball player can take and keep playing is truly amazing).

Fireball got made, as we said, because Tony Jaa movies get made, but someone should have paid more attention to how Jaa and his team film their action scenes, or how Sammo Hung used to edit fights. There is a lot of fast editing, but it’s spread out among longer takes, and they never do that flailing, shaky camera effect that every single viewer in the entire world hates but film makers still insist on using because they think it makes it more “real.” Let me ask you this, film makers — when you run, does your head and field of vision flop about wildly in every direction? No? Then making your camera do that doesn’t make your scenes more engaging or immersive. It just makes them unwatchable.

There’s still enough brutal fun in Fireball to make it worth watching if you’re a fan of the silly and more extreme b-grade Hong Kong action films of the 80s and 90s, but go into it knowing you’re going to be frustrated by its stylistic choices. I guess I’m desensitized somewhat to poorly filmed fight scenes, so I was able to roll with Fireball and enjoy the overall goofiness despite the questionable directorial decisions. A bad action film can be saved by good action scenes, but bad action scenes usually sink even an otherwise good action movie. Fireball isn’t good, but it is totally ridiculous, which would be entertaining if you could see more of what was going on in its frequent, enthusiastic, but horribly filmed action scenes. It turns the film into a disappointment when it should have been gloriously dumb fun. The cast deserves better, and hopefully we can see them assembled in another movie with a director whose inexperience doesn’t manifest itself in the form of using every single camera and editing indulgence that people hate.