Ho hum, the mummy again. That wouldn’t normally be my reaction, as I’m rather a fan of mummies and the havoc they wreak upon the living, but this entry into the Hammer compendium of vengeful Egyptian crypt guardians manages to do very little beyond eliciting a yawn. The Mummy’s Shroud’s problems are several, and not the least of them is the fact that it fulfills what seems to be the mummy’s curse demanding that all mummy movies be more or less exactly like all other mummy movies. This was Hammer’s third mummy movie. There is practically nothing at all on display in this film that is surprising. The plot is a rehash of the tried and true and terribly over-used mummy movie plot involving an expedition that disturbs a mummy’s tomb only to have some mad Arab resurrect the mummy and send it out to kill those who desecrated the temple. Honestly, the things you can do with a mummy are rather limited, so the spark in the story must come from telling it in a unique fashion or injecting some new element into the proceedings to keep them, at the very least, fresher than the cloth-swathed ghoul delivering terror on the screen.

But there will be none of that here. The Mummy’s Shroud hits the requisite points but does nothing innovative or even rote but energetic with them. A far cry it is from Hammer’s successful and invigorating original Mummy film, which managed to bring a new enthusiasm to Universal’s classic Karloff film (and Peter Cushing punching a mummy in the face). Hammer should have learned a thing or two from Universal though, who followed up Karloff’s masterpiece with a series of increasingly lame and lackluster sequels that offered nothing new to the formula or mythology. Instead, Hammer’s cloth-wrapped feet tread down the same precarious trail. 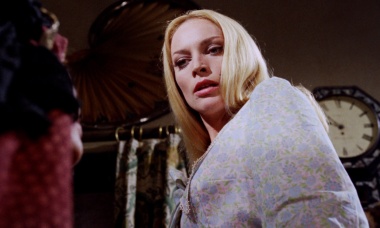 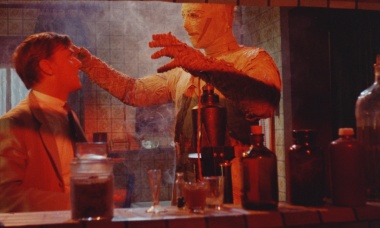 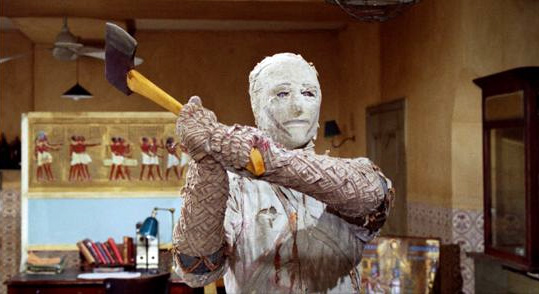 The Mummy’s Shroud, as I said, takes the story from various other mummy movies and puts it out there one more time. We begin with a painfully long prologue, narrated I believe by Peter Cushing — a fact that will only make you all the more aware of the fact that this movie is sadly bereft of Peter and could have really used him. Half the prologue takes place as the camera pans lazily over various “ancient” paintings, which is the first obvious clue that this is going to be a film rather on the cheap side of things. When we switch to actual action for the second half of the prologue, it’s plagued by the same troubles I thought plagued the first film’s Egyptian sets, only more so. Nothing looks the least bit convincing. Everything looks fake, lightweight, and far too clean. The difference between The Mummy’s Shroud and The Mummy is that the 1959 film managed to make up for whatever short-comings manifested themselves in the Egyptian sets by boasting a tight story and great acting from the team of Cushing and Lee — and Lee without even speaking! The Mummy’s Shroud doesn’t have enough going for it in the story or acting department to distract from the high-school play cheapness of some of the sets.

The thing about the prologue is that not only is it long, it’s pretty much totally unnecessary. You could wrap it all up, so to speak, in a few quick sentences of exposition, or Peter Cushing could have simply come on and said, “Listen up, folks. It’s the same old thing, really. The mummy, y’know.” Eventually, we get to the present or to the 1920s anyway, and once again a team of British archaeologists is raiding the tomb of a long-dead Egyptian king. Even the knife-wielding mad Arab can’t dissuade them from carting out the jerky-like mummy of a young boy-king. The Arab this time around is pretty foul. In the 1959 film, there was at least an attempt to give the Arab class and sophistication and intelligence, not to mention a compelling argument against the desecration of tombs by foreign archaeologists who were frequently condescending to “the natives,” treating their tombs as classrooms in ways they would never treat the tombs of whites. This time around, however, the mad Arab is all spittle and bulging eyes. And for your money, you get another mad Arab in the form of the cackling fortune-telling crone. So at least the movie has that going for it. 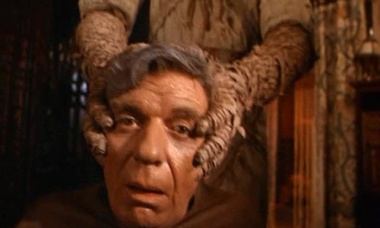 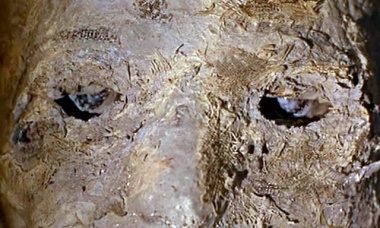 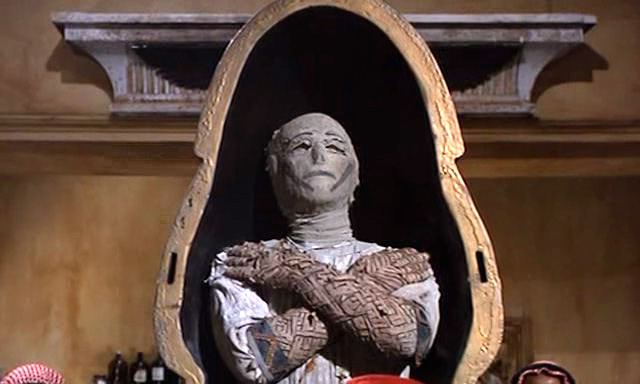 At least there’s something memorable about these two. The greater portion of the cast, that is to say, the British portion of the cast is comprised largely of characters who exist solely so they can be killed by the mummy. Mario Bava’s 1971 thriller Twitch of the Death Nerve is generally tagged as the first slasher film, but if you break slashers down to their basic components, you could say with some degree of security that, if they didn’t start with this particular mummy movie, they did start in some mummy movie, and The Mummy’s Shroud as about as typical a slasher film as you can get, except that instead of half naked teenagers getting killed, it’s fully clothed British academics. But still, you have the unstoppable killing machine. You have the old weirdo spouting portents of doom. You have a cast of largely interchangeable and disposable characters who only exist to be killed, and you have said killings growing ever more ludicrous.

Our nominal heroes are Paul (another Paul? He wander in from a Dracula film) and Claire (Maggie Kimberly), but it doesn’t take much for them to be heroes in a film populated by spittle-spurting crazed Arabs and immoral, greedy millionaires who sweat profusely. The film’s best scene is the finale, in which this particular mummy does provide the film with a little originality by forsaking the usual method of mummy attack (sort of swatting people with your forearms and choking them or throwing them out a window) and just picks up an ax. You know, there are plenty of images in this world that should chill you, but one thing I sure as hell never want to see is a mummy coming after me with a big ax. I don’t really even want to see a mummy without an ax coming after me, for that matter. People tend to scoff at mummies as monsters because they are frequently plodding. Well, first of all, they must have missed Christopher Lee as the mummy leaping through windows and hauling undead ass across the misty British countryside. Second, the thing about mummies is that they never stop coming after you. Once you’re attracted the ire of the cloth-wrapped avenger, probably by dating someone who looks like his long-dead one true love, he’s always going to be looking for you. And sometimes, he’ll have an ax. 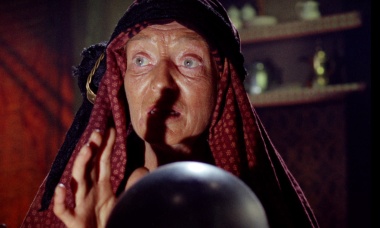 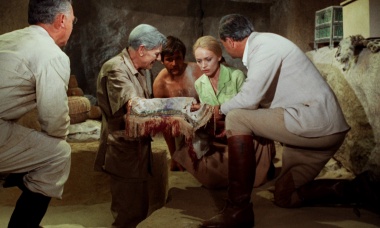 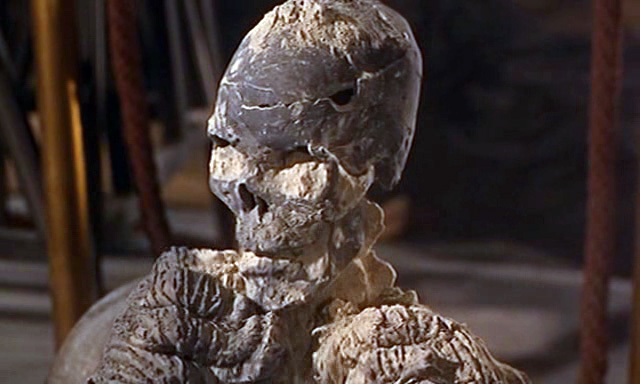 I guess to highlight the positive, another thing this movie does a little differently is that, at least for once, the mummy isn’t swayed by the appearance of a woman who looks just like some long lost love of his.

Speaking of mummies, let’s speak of the mummy. Technically, we have two mummies in the story. One remains inactive and looks like mummies you might see on TV. He has decayed wrappings and is just a shriveled preserved corpse. This would be the body of the boy-king. Why he just got thrown in the sand with a shroud over him while his servant got to get wrapped up and properly stored I didn’t quite understand. The second mummy, the servant, is the one who does the mummyin’ around and killing. Although the face was modeled after an actual mummy on display in England, the mummy itself is pretty silly looking. It’s bandages look more like a big hockey jersey, and the face is too packed with “the crust of the ancients” to afford the creature any of the range displayed by Christopher Lee during his turn as the ancient Egyptian avenger. Though the idea may have been to make the mummy less of a “human” character and more of an unstoppable supernatural force, what it actually did was just make the mummy more of a dry character (sorry) and thus a lot less interesting. The one scene where we do see the mummy’s eyes, we’re treated to a rather unconvincing animatronic model. There is a reason people remember Christopher Lee as the mummy but not Eddie Powell.

But again, a crummy mummy (again, sorry) could have been compensated for by a good script. With that absent as well, The Mummy’s Shroud just collapses in on itself much like its mummy during the finale. This movie does have a couple decent scenes, and no Hammer horror movie ever fails to entertain me at least somewhat. The mummy’s attack on a photographer of no importance to the story is exciting, if totally irrelevant. And his assault on the beleaguered assistant to the sweating millionaire is probably the film’s only emotionally engaging scene as it seems so unfair that the abused toady remains abused and then just gets offed by the mummy. Unfortunately, it’s not enough to string together into a good movie, and while The Mummy’s Shroud isn’t a total loss, it’s really the sort of film only for people like me, who are Hammer and/or mummy completists.