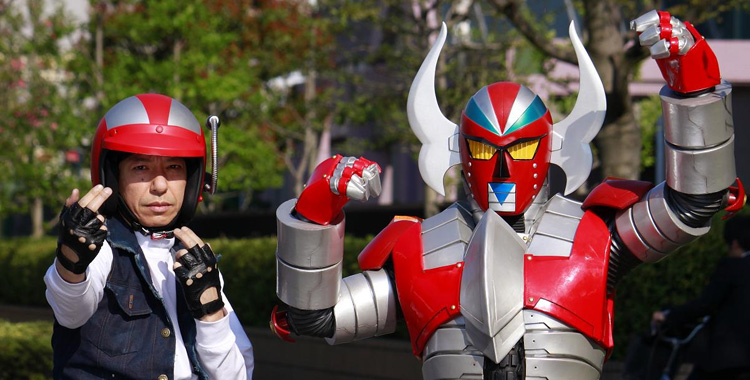 Karate Robo Zaborgar presented me with the sort of soul-searching conflict that often plagues those of us who worry about the higher philosophical questions in life. On the one hand, it was a presumably loving spoof of one of my favorite genres — the old “tokusatsu” superhero shows of the 1970s, with their karate cyborgs, fringed jeans, motorcycle helmets, random explosions in rock quarries, and theme songs dominated by jazzy trumpets. On the other hand, I watched a similar movie last year — Takashi Miike’s Yatterman — and still consider it one of the worst, most unenjoyable movies I’ve seen in the better part of a decade. My bottomless disdain for Yatterman comes despite the fact that I generally like Miike as a director. Karate Robo Zaborgar, by contrast, was directed by Noboru Iguchi, a director who has yet to make a movie I didn’t dislike. His stock in trade is slapstick splatter send-ups of popular Japanese genres, but done with such juvenile laziness and awkward, ill-realized timing that what should have been outrageous comes across merely as tedious.

But there’s also something about Iguchi that keeps me watching every new movie he makes, no matter how much I didn’t like the previous one. That something is sixteen year old me, who if he saw something like Robo Geisha or Machine Girl, would no doubt go ape shit over them. Present day me watches Iguchi films and shakes his head at the desperate attempts at “WTF moments.” I’ve seen it all before, and usually it’s been done much better, with fewer awkward actresses standing around waiting a couple seconds too long after their cue to delvier their lines. But sixteen year old me, he is strong and, ultimately, impossible to resist forever. When I first saw previews for Karate Robo Zaborgar, I knew that I’d be seeing it eventually, but unlike most of Iguchi’s films, I thought I might actually look forward a little bit to this one, especially since early reports were that Iguchi reigned his over-indulgence tendencies in to a substantial degree. 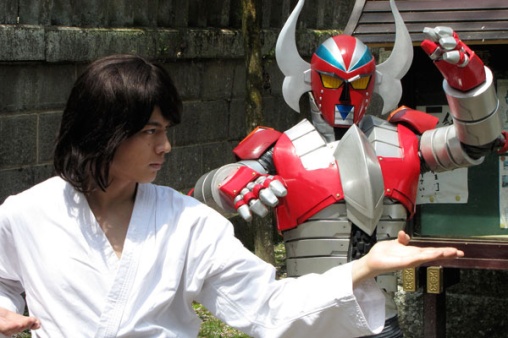 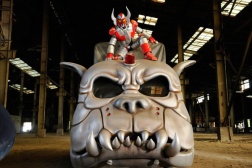 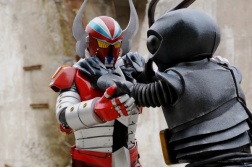 It turns out that Karate Robo Zaborgar is a lot of fun. Like Takashi Miike’s Yatterman, Iguchi’s salute to the tokatsu shows of old is probably twenty minutes too long than it needs to be; Unlike Yatterman, though, I found myself laughing a lot during Karate Robo Zaborgar and actually enjoying it. Although I’ve seen plenty of Japanese superhero and robot shows, I’ve never seen the original Karate Robo Zaborgar. I knew generally what to expect, but not much else, especially coming from this particular director. Scenes from the original show play during the closing credits and deliver the film’s best joke — that despite how outrageous and insane the movie was, almost all of it was played more or less completely straight and true to the source material. A similar thing was done with the recent OSS 117 movies (Cairo Nest of Spies and Lost in Rio), where merely sticking closely to the outdated and over-the-top source material resulted in effective comedy.

Daimon (Yasuhisa Furuhara, a veteran of some actual sentai superhero shows) is a shaggy-haired young man in a white turtle neck and tight denim pants and jacket, forever sporting his unwieldy red helmet — which he can use to command his super-sweet transforming robot motorcycle, named Zaborgar. Daimon has sworn to help police fight Dr. Akunomiya’s (Akira Emoto) mysterious terrorist organization Sigma, which is trying to kidnap Japan’s political and scientific leaders in order to power a giant cyborg. Fighting on the side of Sigma is Miss Borg (Mami Yamasaki), who is increasingly conflicted as she faces Daimon’s righteousness while suffering degredation and abuse at the hands of her male accomplices. Daimon himself is having moral issues, as he grows to respect Miss Borg while recognizing that the politicians he is saving are a generally scummy, disgusting bunch of people.

A number of fights ensue, with Daimon karate kicking his way through assorted minions while Zaborgar — possibly partially a reincarnation of Daimon’s twin brother (I think) — throws down against outlandish cyborg villains. things come to a head when Daimon is forced to choose between saving a corrupt, selfish politician or saving Miss Borg, a decision that leads to the ashing young hero losing the faith of the police and of his robotic sidekick, who is destroyed in the ensuing fight with Miss Borg. At this point, the series would end on a cliffhanger, and we’d come back shortly afterward, with Daimon rediscovering his righteousness, rebuilding Zaborgar, and resuming the good fight against the evil Sigma. Confused sexual tension between he and Miss Borg would carry on, Batman/Catwoman style, and everything would be as it had been before the dramatic season finale. 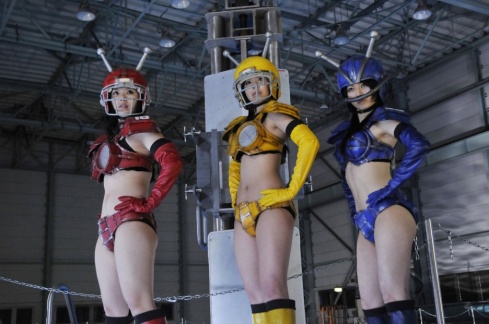 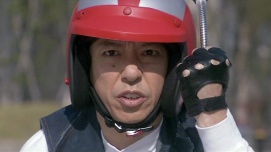 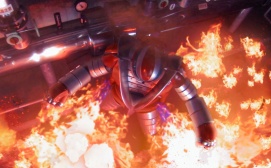 That’s not really how things play out here, though. Instead, we skip ahead twenty-five years. Daimon is now a broken, upper middle aged man (played wonderfully by Itsuji Itao) with a bad back and diabetes, working as a chauffer for the same scummy politician who has been bullying him since the hero days. Daimon, of course, is still wearing the same white turtleneck, denim vest and jeans, and helmet, and Sigma is still kidnapping high ranking officials (it turns out that it takes a lot of politicians to power a giant cyborg), but the fight is out of his hands — at least until a young female cyborg escapes from Sigma’s floating fortress and reveals to Daimon that she is the daughter of him and Miss Borg. With no one else left to take on the mad Dr. Akunomiya — whose giant cyborg is slowly nearing completion and will use Daimon’s daughter as its primary power source — it’s up to an aged Daimon to rebuild Zaborgar, team up with his old cop buddies (who have donned bright pink shirts and call themselves the League of Smiles), and finish the fight once and for all.

Iguchi films are often identified by the amount of spraying blood that comes form slashed throats and the creativity and number of weapons that shoot out of schoolgirls’ butts. If you’re a fan of the director’s previous work, there will be a small amount of what you’ve come to expect (a couple arterial sprays, and a trio of bikini football uniform cyborg women who shoot dragons out of their boobs), but for the most part, Iguchi is keeping Iguchi in check, allowing the director to make a movie that has to succeed (or fail) on its merits as a film rather than getting by with a series of goofball splatter highlights strung together by bad acting and bad editing.

I didn’t know if Noboru had it in him to make a “real” movie. Better bad directors have tried and failed. But he really nails it with Karate Robo Zaborgar. The story is funny and surprisingly faithful to the spirit of the original material, relying on… you can’t exactly call it a more “subtle” form of satire than Iguchi previously employed… but it’s a lot less juvenile, screachy, and concerned with proving how outrageous it all is. As a result, it’s a heck of a lot funnier. There’s also some genuine emotion — I know, I know. It’s a movie about a karate kicking robot fighting an ant-shaped Diarrhea Monster (which does not shoot diarrhea, though, as it would have probably done in any other Iguchi film) and features a fight scene atop the metal bikini-clad boobs of a giant cyborg schoolgirl. At the same time, though, tokatsu shows were always big on melodrama. And there are some scenes featuring the older, broken Daimon that are genuinely bittersweet.

There’s still some timing issues, and some shots that seem to continue a second or two longer than they should on an actor who is just standing around. There’s also a problem with darkness in some scenes. Iguchi previously worked in digital video; his is one of his first foray into 35mm film making, and I think some fo the scenes might be a tad underexposed. Not horribly so, though, and since most of the film takes place in the daytime, it’s not that big a deal. Additionally, some of the CGI is dodgy, but that’s par for the course in an Iguchi film and, at this point, I think largely intentional. All in all, Noboru Iguchi and his cast deliver a thoroughly enjoyable film that manages to succeed as a spoof of and example of fun superhero scifi. I went in not so much with low expectations as I did with a mildly antagonistic attitude, and Karate Robo Zaborgar won me over.