It’s been too long since we last visited the bizarre world of cut-rate Korean cartoons made by a Chinese guy using Japanese robots and characters and marketed toward Australian television, so let us once again steel ourselves for the bad acid trip that is a Joseph Lai produced cartoon. Lai, to bring up to speed those of you who don’t know him, was a producer most famous for taking bits and pieces of cheap Hong Kong and Taiwanese movies and splicing them together to form a new movie, usually augmented by freshly shot scenes of white people in ninja outfits. The films border on works of absurdist art masterpiece. With titles like Ninja Phantom Heroes, Ninja Demons Massacre, and Diamond Force Ninja, Lai’s films — often created in conjunction with shadowy men of mystery Godfrey Ho and Thomas Tang — did far more than make no sense at all. They attained a rarefied air of complete and utter incoherence that has remained largely out of the reach of even the most incompetent of filmmakers.

In the early 1980s, a series of bargain bin Korean cartoons started showing up on Australian television. Like a snake eating its own tail, one movie would freely and generously recycle footage from the others, allowing what had probably been a couple separate movies to then blossom into six or seven movies. And there, at the beginning of every one, was the name of Joseph Lai, set majestically against a disco light backdrop. Lai had purchased the original Korean movies, dubbed them, and sent them off to unsuspecting Australians, who being trapped on their own island-continent, had nowhere to flee. These films have recently been rediscovered and achieved a certain degree of infamy for a number of reasons. 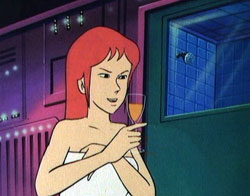 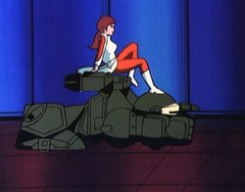 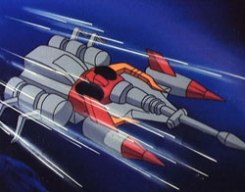 First, they are just awful. I mean, mind-blowingly awful. The stories rarely make a lick of sense. The animation is beyond crude, making even the flagrant lack of attention paid to the Challenge of the Superfriends seem diligent by comparison. Second, and of more importance to the fans who stumbled across these movies in the dollar bins of Wal-Marts across America or on Australian afternoon television back in the day, although the animation and artwork was original, the robots and characters who populated these films were often copies of more famous Japanese counterparts. Anything from Raideen to Gundam to the Space Battle Cruiser Yamato being piloted by the Voltron crew could show up in one of these things. Playing spot the source material becomes almost overwhelming, so multitudinous are the blatant violations of intellectual property. Since Japanese material was banned from South Korea for a long time, Korean audiences wouldn’t know the difference.

I hope that, as we continue to work our way through the other titles that serve to flesh out this animated Joseph Lai universe, we will continue to pick up bits and pieces of information about the films and how they came to be. At this point, I guess we know they were originally made for Koreans who couldn’t watch Japanese stuff, and then were purchased and dubbed by Joseph Lai to distribute in Australia. Somehow, someone got a hold of most of them and put them on DVDs that could only be sold at Wal-Mart. 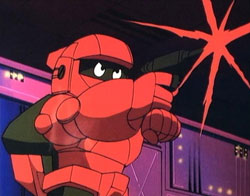 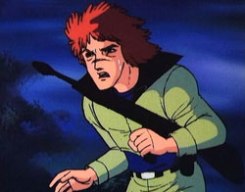 Of the films in this series, Space Thunder Kids is probably the most mind-blowing, as it was assembled entirely out of the pieces of the other films, presumably by ten different groups working in ten different locations around the world, with no contact between them. It’s possible that the various pods and hatches in Lost are actually the hermetically sealed locations where Space Thunder Kids was assembled. So colossal is the ineptitude of this film that it can scarcely be communicated using any human language, though I did my best when I reviewed it a while back. Space Thunder Kids actually ceases to be a movie at some point, and becomes an entirely different form of art so advanced that we humans can’t even conceive of it. It is like the high art of advanced race of alien gods, and we have no frame of reference we can use to wrap our heads around it. Short of asking yourself what existed before the universe, “what the hell does Space Thunder Kids mean” is perhaps the most perplexing question of our time.

Hot on the heels of Space Thunder Kids came Solar Adventure, a feature that mixes live-action footage with animation and features a number of robots stolen from The Transformers, among others. Many scenes from this movie also show up, within a different context, in Space Thunder Kids, including the evil machinations of a green alien and a dastardly, goiter-sporting communist leader meant to be Kim Il-sung. Now we turn out attention to yet another member of this elite family of animated wonders, Space Transformers, which dares ask the challenging question: is a microscopic giant robot still a giant robot? 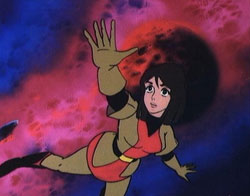 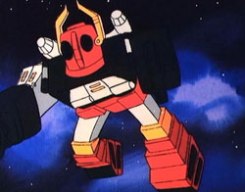 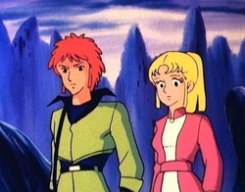 As with most of the films in this series, the earth is under attack from sinister, crudely drawn aliens. We meet them at first when they attack an orbiting space platform that looks suspiciously like the Super Dimensional Fortress Macross, or like the orbiting space platform that showed up at the beginning of Space Thunder Kids. These aliens look human and command robots that pilot larger robots that shoot meteors and carry axes. Why you would need to carry an ax if you can already shoot meteors is a bit of a mystery, but then I reckon you need something for close quarters combat. After the attack has begun, the space fleet gets a transmission from Ivy, “the world’s most special girl,” warning them of an eminent alien attack. Her ability to warn people of things that started happening a few minutes before she warned people of them somehow makes her the lynchpin in Earth’s plans to defeat the aliens. Exactly how this helps in the fight against aliens or why these movies are always pinning the hopes of the galaxy on twelve-year-olds is never really explained. 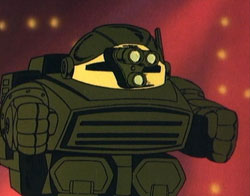 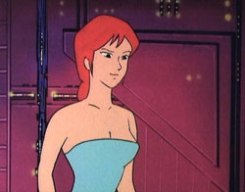 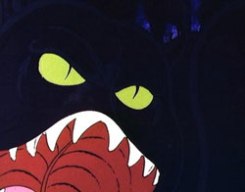 Unfortunately, evil alien leader Tonga knows Ivy is the Earth’s most special girl, and so he sends assassins to earth to eliminate the only threat to his dreams of conquering Earth. Meanwhile, Earth’s giant robots seem pretty adept at destroying Tonga’s invading fleet without any input from Ivy. But why root for the giant robots when Ivy could save us all by telling us things that are already happening? Despite being guarded by a crack team of giant robot pilots and scientists, aliens manage to infiltrate the hospital where Ivy is hiding and shoot her, thus ending her threat and dashing the hopes of all mankind. No wait, how silly of me. They shoot her, yes, but rather than just using a bullet and killing her, they use a virus ray that causes her to lapse into a coma as she is slowly killed by the disease with which they have infected her. Luckily, this gives the humans time to devise a plan to save Ivy’s life. Eventually, they decide the most logical way to deal with the situation is to shrink some giant robots and their crew down to microscopic size, inject them into Ivy, and let them travel through her body on a mission to destroy the disease and save her life. So basically, it’s The Fantastic Voyage but with giant robots and Robin Hood’s Merry Men. Oh wait, I didn’t get to Robin Hood’s Merry Men yet. 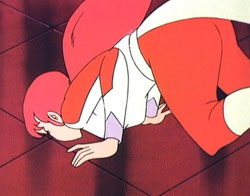 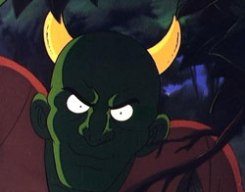 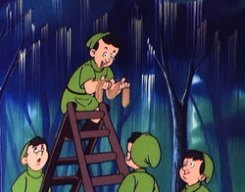 Once inside Ivy’s body, we learn a number of important things about the human anatomy. For example, we are full of planets and suns and swirling spiral galaxies. Some of those planets are inhabited by suspicious but ultimately friendly medieval guys with monk haircuts. And Keebler elves. Other planets are inhabited by green goblins in loin cloths — presumably the viruses injected by the aliens into Ivy — who enslave the good peoples and force them to perform random tasks of physical labor when they aren’t throwing them into a pit containing a man-eating octopus. Still other planets are populated by sexy women who like to fly around on space platforms and command giant robots and super deformed Gundams who like to watch her take showers.

So begins a series of thrilling battles between giant robots, as well as a scene of a smart-alec little robot (I mean littler than a microscopic giant robot) kicking the evil chick in the butt over and over again, until something completely weird happens in the end which I think results in some or all of the heroes dying or something. Or they don’t. And then everyone gets out of Ivy, presumably after having usurped the goblin conquest of her internal organs, and the giant robots fly off to beat the alien armada — without any help or battle plan from Ivy, who they just spent the entire film saving, presumably because only she knew how to beat the aliens. Incidentally, at some point, the aliens go from being human in appearance to being green guys with blue bowl cuts, but at this point in our journey through Joseph Lai productions, this hardly even phases me. 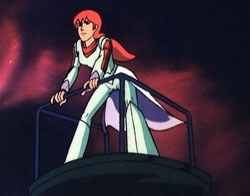 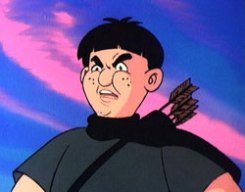 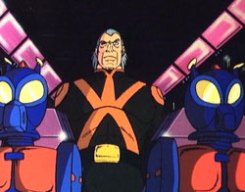 Incredibly, Space Transformers is even more bizarre than Solar Adventure, and while it is more decipherable than Space Thunder Kids, it certainly approaches that film in terms of sheer lunacy. Among other things, it taught me a lot about the human anatomy and what sort of crazy stuff goes on inside the body of a pubescent girl. It is at least as accurate about teen bodies as those old films we watched in middle school, where a boy would think about kissing a girl and as a result, he gets horrid, acid-spewing lesions on his penis. Space Transformers also posits a more hopeful future for human infection, envisioning a future where an infestation of spear-toting goblins and cackling evil women on flying discs can be taken care of via tiny transforming robots and their sass-talking human crews. 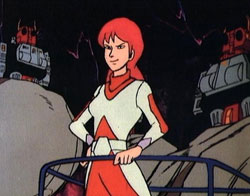 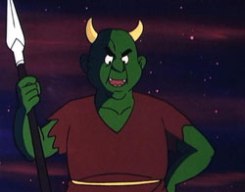 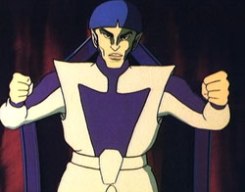 Anyway, I can’t help but admire the crackpot imagination behind this scenario. I don’t know if these fights actually count as “space” battles.” I mean, they are battles that take place within a defined space, and the backgrounds are all Milky Ways and Saturn, but technically, we are inside a teenage girl’s body — a statement which is going to mislead a lot of Google searchers. The body as universe is hardly a new metaphor, but I don’t know that anyone has taken it quite as literally as Space Transformers, where the human body literally contains a universe, complete with medieval societies, elves, and spaceships. And of course, the asteroid belt surrounding Uranus. Sorry, but there was no way I was getting through this review without at least one Uranus joke. 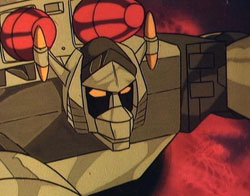 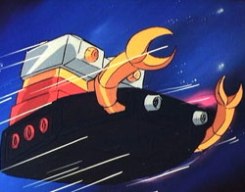 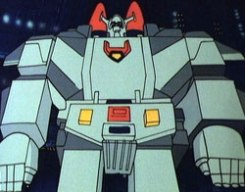 I doubt that anything will ever unseat Space Thunder Kids as the king of the Joseph Lai animated titles, but Space Transformers comes awful close. It’s packed with action, as most of the films are, and everything about it is just so weird. And the culmination of the in-body battle is just bizarre. Suddenly, everything gets super melodramatic and full of tragedy, and there’s a nuclear explosion, which can’t be good for Ivy. Then everyone inside her dies. At least I think they do. Honestly, it’s pretty hard to tell what actually happens. And it doesn’t really matter since, in the end, Ivy has absolutely nothing to do with the war against the aliens.

Still, there’s plenty of space battles, or whatever space battles are inside the human body, and plenty of robot fights. It lacks the green alien with the big head and Kim Il-sung with his bulbous tumor, but it replaces that with gut goblins and epic spaceship and robot battles, so I’m good.