When last we left the dastardly, skeleton-suit clad Kilink — self-proclaimed King of Rogues and master of all evil — he was in his secret island lair (well stocked with randomly placed and artfully-posed bikini girls), casually bragging about his super-weapon (a rickety looking laser gun) while harassing a scientist and the scientist’s beautiful daughter, who just happens to be the fiancée of a man whose scientist father was previously murdered by Kilink, causing the man to swear vengeance and thus be granted super powers and a bad costume by a crazy hobo in the cemetery.

Got it? Well, if you didn’t no worries, because the cliffhanger ending of Kilink Istanbul’da springboards us immediately into the sequel, Kilink Ucan Adama Karsi (Kilink vs. Superman), but not before the second film takes twenty minutes or so to recap the events of the last movie. Out of respect for this technique, I was simply going to cut and paste the first quarter of my Kilink Istandbul’da review here, but then I thought that would just be silly. Besides, I tend to repeat myself and say the same things over and over anyway, so chances are, there will be plenty of retread material even without the cut and paste gag.

And speaking of retread…

As I said in the review of the first film — and note that calling Kilink Istanbul’da the first film is misleading, as they are really nothing more than one long movie chopped up into two episodes — the Turkish Kilink movies were drawing major influence from both the Italian fumetti characters Kriminal and Killing, but perhaps even more so, they were looking to the old American adventure serials for their formula and structure. Thus the serial-like cliffhanger ending, although to be fair, your final shot being Kilink hanging out in his living room while the good guy stands on the pier is somewhat less thrilling than many serial cliffhangers tended to be. Additionally, the recap of the previous “episode” is another trick straight out of the serials. The summary is nice, however, because it does contain bits and pieces of footage that were lost from the actual print of Kilink Istandbul’da, so if you want to get a glimpse of some Saddam Hussein looking guy laughing as he turns a knob, then this is your chance.

Kilink Istandbul’da sets us up for the main event in Kilink Ucan Adama Karsi. Until this point, Kilink and Superman…er, Superhero…have only met face to face in costume once, and that showdown ended with Kilink swapping identities with a doorman who he somehow convinced to not only wear a skeleton outfit, but also to try to escape from the combined forces of Superhero and the Istanbul police force via a slow-moving construction dumb-waiter. We can assume, based on the title of this entry in the Kilink series, that we’ll finally be getting the tete-a-tete between the villainous madman and the guy in the padded suit and striped bikini. 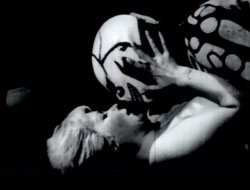 Now Superhero is the good guy, remember, but it’s kind of cheating on his part to need the help of a randomly appearing god disguised as a homeless hippie and granting superpowers to beat Kilink, who has no superpower other than the ability to prance around in a ridiculous looking skeleton costume without ever actually looking ridiculous. given as how Kilink was distilled from an Italian character, I can only assume that this power is likewise some adaptation of the super power that allows Italian men to look awesome in clothes that would look idiotic on anyone else.

In fact, if you recall from the review of part one, I said that contrary to Diabolik or Kriminal, Kilink is without a doubt the villain of the piece, and we are meant to root for Superhero and the good guys. This has a lot to do with the Turkish filmgoing population’s preference for identifying with a strong, black-and-white hero. Superhero is both strong (see how he throws those concrete slabs around in the first film — a brute display of strength that was probably unappreciated by the cemetery employees who came in later that day and had to clean up the mess made by Superhero and his weird Fred Sanford’s friend Grady lookin’ god) and his film is in black and white, so the Turks were in luck!

But by the time this second part rolls around, I’m suddenly thinking to myself, “This Kilink, he’s not so bad.” Bear with me. 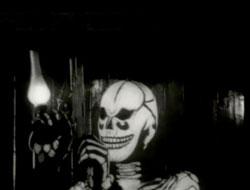 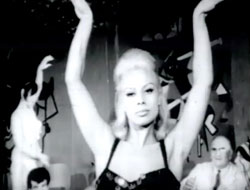 Part two opens with Orhan trying to find a ride to Kilink’s mysterious secret island, which can’t be too terribly secret if every fisherman in Istanbul knows it’s crawling with guys in genie pants and some dude in a skeleton suit running around on the beach. Eventually, Orhan finds a guy willing to take him to the island, even though — hey, wait? Isn’t Orhan possessed of super powers that allow him to, among other things, fly? I guess he’s such a good guy that he doesn’t want to use his superpowers when he could help out the local economy by hiring a boatman and putting the guy in mortal peril by making him sail out to Kilink’s island of doom.

Meanwhile, Kilink is splitting his time between making love (whilst still in his skeleton outfit) to his two beautiful women (Suzy and that ridiculously hot secretary he corrupted in part one) and showing off the awesome might of his now fully operational super weapon: that cheap looking laser gun. When he finally unveils his weapon, the end result is — well, like I said, maybe he would have been better off if he invested his time in trying to steal an atom bomb, because the laser cannon isn’t horribly impressive. I mean, he blows up a boulder with it, and later on he’ll use it to mildly inconvenience Superhero, but other than that I don’t see the world quaking in fear at the skeleton-bootied feet of Kilink just because he has a laser cannon — especially given that everyone seems to know where Kilink is, and they could just drop a bomb on his lair and be done with things. They must have plenty of bombs, because Kilink didn’t try to take any of those.

The action on Kilink’s island is pretty boss. He’s got bikini girls, and although he talks big about conquering the world, he seems more interested in lounging around in his cave’s boom boom room, letting that hot secretary writhe about and strip while Suzy massages his shoulders and guys in Genie pants and vests with a giant felt “K” on them lean on their machine guns. And this is the point where I started thinking we should give Kilink a chance to rule the world and see how things work out. I mean, I know his super weapon is super-lame, but still — his primary vision of the world seems to be one full of half-naked women slipping out of slinky cocktail dresses, groovy music, and guys with Rollie Fingers mustaches and genie pants. That doesn’t sound so bad to me. Sure, Kilink has a tendency to randomly walk up to some guy who works for him and say, “Don’t disappoint me, or I’ll kill you,” even though nothing is going on at that moment, but whatever. What world leader doesn’t have his idiosyncrasies? Let’s give Kilink a go. I mean, we gave G.W. Bush four years of nothing but endless fuck-ups and corruption, and then we gave him four more still. Is being ruled by Kilink with his “hot Turkish stripper in every den” policy really so bad by comparison?

Anyway, Kilink soon learns that nothing gold can stay, as Orhan arrives to change into Superhero and smash things up. Kilink unleashes the power of his laser beam, which is now suddenly a flamethrower — making it even lamer as a world-dominating super-weapon — which causes Superhero to have to sort of suck it in (hard when your body mass is composed primarily of pillows stuffed into your long johns) and stand against the wall for a little bit. It’s enough time for Kilink to make his escape, though, in classic third world dictator form. Actually, I guess those guys usually commandeer a jet at the airport, or get a free ride from some other country’s government. Kilink makes his escape in, of all things, a rowboat. Ahh, but it’s not really Kilink at all! It’s a fat, old scientist who, when disguised as Kilink, suddenly becomes a fit, muscular man. Kilink himself slips out the back door, and begins plotting a decidedly less Bondian, more Kriminal/Diabolik scale caper: stealing jewels from a hot princess. 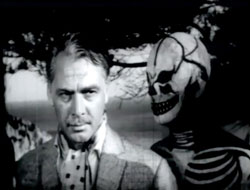 Unfortunately, we only get the gist of things here, as the latter half of Kilink Ucan Adama Karsi has been, as far as anyone can tell, forever lost. Onar films did their best to fill in the gaps by summarizing the rest of the action via a series of stills and narration that take us through to the final shot of the film — which is Kilink lying dead — apparently — in the street after taking a tumble in what looked like it would have been a pretty awesome fight with Superhero, had we been able to see it. Onar also had the decency not to sell this as a complete film by itself on a DVD. It’s a double feature with the third Kilink film (which picks up immediately where this one ends). So they make do with what they got, and it’s not their fault, but that doesn’t change the fact that the presumably “forever lost” status of the second half of this film (mixed with the fact that half of the first half is just a summary of the first film) is disappointing, because it looks fabulous. And it looks like Kilink might actually fight Superhero at this point, because up until now, his primary mode of operation has been to run away. But that’s all right, because Kilink would rather spend his energy making love and watching strippers. After all that combined with having to spend part of the day standing with arms akimbo or pointing menacingly and laughing, he hardly has any energy left for tangling with over-enthusiastic magical superheros in striped granny panties.

Still, what’s here is worth seeing. Onar has greatly improved the quality of their subtitled with this release, and the picture quality is much better than it was with the previous film. The showdown between Kilink and Superhero on Kilink’s island of pleasure and certain death is high-spirited and energetic, with some great fights and plenty of action. We’re better off for having seen at least this small surviving sliver of the film. And luckily, Kilink never stops to take a breath, and no sooner is he lying dead on the street than he is also taunting people via some unseen and inexplicable public address unit, promising to return. And return he does, in the promisingly titled Kilink: Strip and Kill.