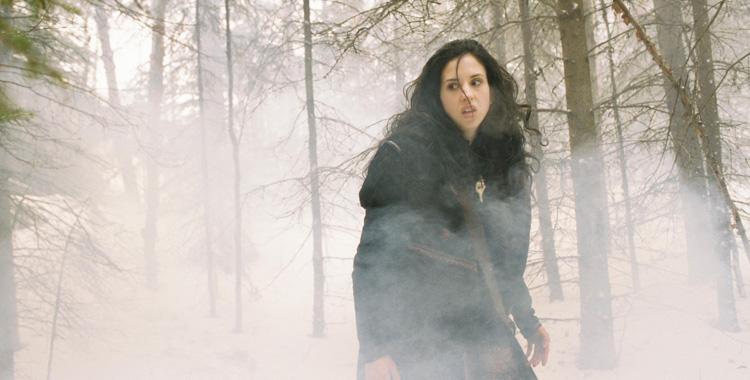 It’s difficult to freshen up a hoary old concept without losing the essence of what made that concept eventually become hoary. Reinterpretations of classical monsters often go so far afield from the original idea that they might as well be called something else — the werewolves in the Underworld series for example, or the vampires in the Twilight series. Every now and then, however, someone hits on just the right combination of innovative twist and respect for tradition that can liven up a well-worn genre without turning it into something unrecognizable. Screenwriter Karen Walton’s Ginger Snaps accomplished just that. It took the werewolf movie and turned it upside down without ever disrespecting it or feeling like it needed to distance itself from being a werewolf movie. It was a fantastic surprise of a film that pleased a lot of people. Equating lycanthropy to the struggles of pubescent high school girls also gave film critics a lot to write about. It’s always fun to stumble across a movie that is interesting to discuss.

When Ginger Snaps proved to be a surprise DTV hit, a sequel was rushed into production which, unfortunately, did not feature a script from Walton or direction by John Fawcett. Although Emily Perkins returned from the original film, first-time screenwriter Megan Martin’s script — this time drawing parallels between lycanthropy and drug addiction — shoots for the same mix of cleverness, earnestness, wit, and pathos as the first film but never quite achieves it. With the interaction between Ginger and her sister Brigitte more or less non-existent, the film becomes more grating than confrontational. Overall, Ginger Snaps: Unleashed is a worthwhile effort but not the movie the first one was. Still, enough people watched it that it was decided a third film was justified (apparently just a couple weeks after the second film was completed), and so we have Ginger Snaps Back: The Beginning. Once again, the creative team from the previous film does not return, with director Grant Harvey replacing Brett Sullivan and screenwriters Christina Ray and Stephen Massicotte replacing Megan Martin. What’s more, the entire concept of lycanthropy as a metaphor for teenage problems (sexual awakening in the first film, drug addiction in the second) is more or less jettisoned in favor of a much more straight-forward period-piece monster movie. A lot of fans of the first two films were not keen on the shift away from modern-day body horror to dark fairytale, but since I am a sucker for such films I figured I would be more open to liking it than others apparently were. It turns out I was right. I love this movie.

Set on the Canadian frontier during the 1800s, we find ourselves in the company of Ginger (Katharine Isabelle, a welcome return after having little more than a cameo in the second film) and her sister Brigitte (Emily Perkins) stranded in the wilderness after a boat accident. They eventually stumble upon a local hunter (Nathaniel Arcand) and a suitably mystical grandmother making the usual dire predictions and portents of doom. Hunter leads them to a nearby outpost occupied by men who are paranoid, weird, angry, or some combination of those things. Which is only fair, I reckon, since their isolated fort is low on supplies with no hope of restocking or reinforcement. Oh, and also, they are under siege during the full moon by a pack of werewolves. 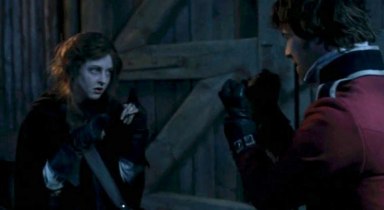 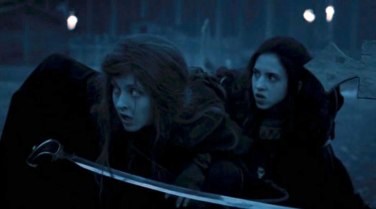 Predictably enough, Ginger is soon bitten and begins to exhibit signs of rapidly turning into a werewolf herself, something Brigitte does her best to hide from the men in the fort since she knows the reaction will be a bullet in her sister’s head. But it’s pretty hard to keep that sort of thing quiet, especially when Ginger’s werewolfy hunger starts pushing her to feed. Where as the lycanthropy in the first two films has an air of metaphor about it, here it’s much more straight-forward. She’s just turning into a werewolf, without the werewolfery being a stand-in for something else. Fans of the first film, and even the second, were perhaps let down by this much less allegorical interpretation of Ginger’s curse. Personally, I feel after the first two movies, I had the gist of things and it would have been a tad repetitive to have a script that said, “OK, this time being a werewolf is a stand in for…” insert whatever other problem young women have to deal with. Returning to a shallower but much more classical presentation of lycanthropy is, in its way, as much of a twist as the more complex presentation was the first time around.

Plus, sometimes I just like a good horror film, and Ginger Snaps Back achieves that fantastic blend of Universal style horror and dark fairytale that appeals to me yet is so rarely effectively realized. Being a low-budget film shot in 2004, it leans a bit too heavily on tinting everything blue, as if the clouds of breath, clumps of dead trees, and endless expanses of snow were not enough to communicate that it’s cold. But that’s a minor quibble, and given the frustrating persistence of this sort of color alteration in modern cinema, I suppose i should just deal with it. Luckily, Ginger Snaps Back has plenty else to offer. The setting is satisfyingly bleak and hopeless. Horror films set on American frontiers like this are not common, but it’s one of my favorite settings and one I think is sadly underused. Old wooden forts, snow-swept forests full of unknown threats and terrors and sounds, mysterious figures in black cloaks — you couldn’t ask for a better setting for a horror film, especially one that also dips liberally into the realm of Grimms Fairytales.

Like the first two films, Ginger Snaps Back is a low-budget affair. Unlike the first two films, it cannot fall back on a relatively easy to realize modern setting that doesn’t eat up budget in production design. A remote 1800s fort in the woods isn’t exactly recreating New York City or anything, but when it’s done poorly it still looks cheap. Ginger Snaps Back does not show its low-budget though, thanks perhaps in part to dark lighting, and also thanks I assume to the fact that 90% of Canada still looks like this, except with a few more Mounties about the place. I like the idea of being trapped and confined in such wide-open space, and the siege aspect of the situation recalls the luckless trapped soldiers in Dog Soldiers. 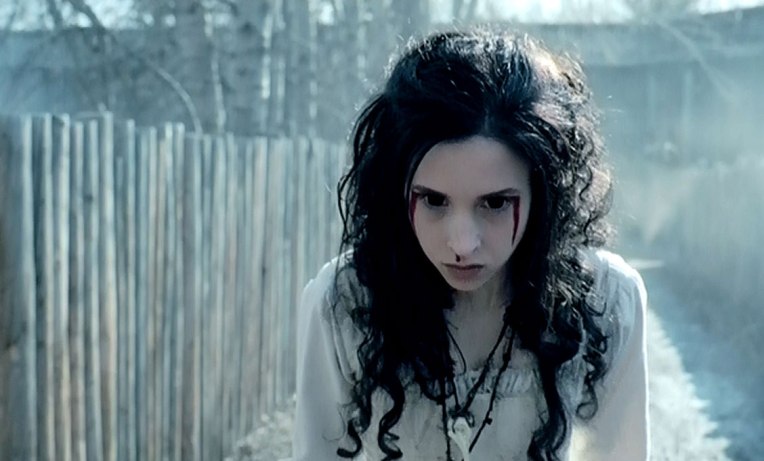 The central appeal of the Ginger Snaps movies has always had less to do with setting and horror and more to do with the relationship between the two sisters. After Ginger herself was (necessarily, I suppose) restricted to haunting Brigitte in cameo appearances, it’s nice to see the two of them back together full-time. Unlike the first film, where Ginger’s transformation causes considerable friction and fighting with her meeker, weirder (but just barely) sister, Ginger Snaps Back sees te sisters getting along quite well even when the fur and fangs start to sprout. I don’t really miss the bickering, even though i didn’t mind it the first time around, and I really like watching the two young women stick by one another in a situation that was dangerous (stranded among a load of on-edge, isolated men) even without the added complication of werewolves prowling about the place. The assumption, of course, is that these two women are ancestors of the two we meet a century and a half later, but that’s never really stated and I don’t think it matters. Ginger Snaps Back could just as easily be an alternate werewolf tale with no direct connection to the other films. 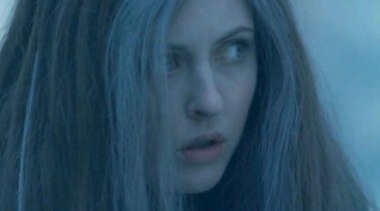 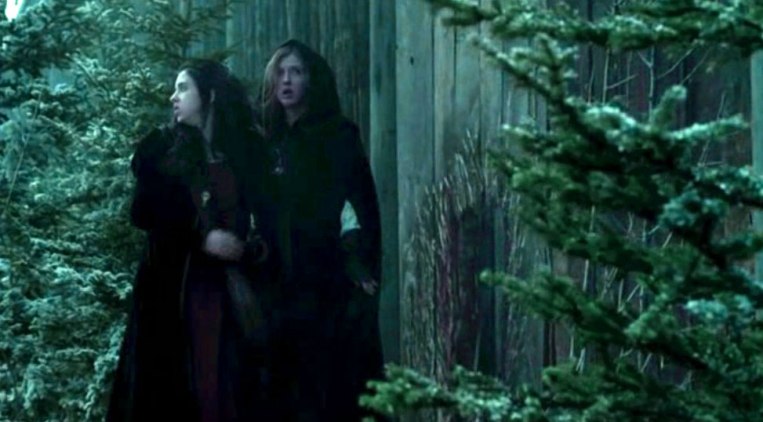 Although they are inhabiting familiar characters, neither Emily Perkins nor Katharine Isabelle rely on simply reprising their performances. Despite names and appearances and a Ginger who gets attacked by a werewolf, these are not the same woman as in the first film. This version of Brigitte is much better adjusted and “normal” by whatever standards decide what is normal. She doesn’t have freak outs, and although she gets nervous, she also does her best to maintain control of impossible to control situations. Perhaps she’s an older, more mature version of what her character from the first film could have become. Similarly, this version of Katharine Isabelle’s Ginger is less confrontational, less in your face, and less brazen. Where she embraced her changed with an awkward blend of terror and enthusiasm in the first film, here she is much more desperate and confused. I really like both actresses, and I really like the way they keep their characters recognizable without simply imitating their previous performances. Modern anachronisms in their behavior may slip in from time to time, but in a post Hercules: The Legendary Journeys world, Ginger striking a boxer’s pose seems to not even merit classification as a misdemeanor. 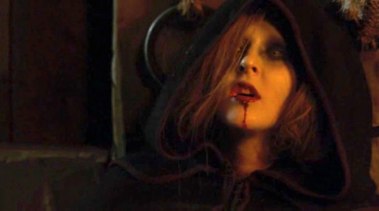 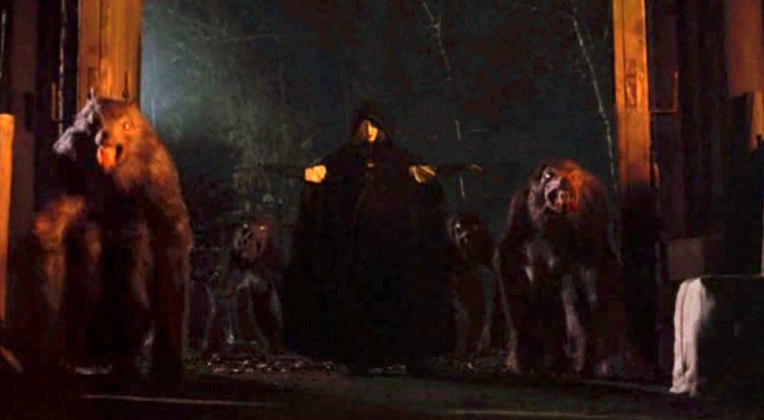 I also really appreciate that the central story here, and the central relationship, is about and between the two women and the loyalty they have to one another. It must have been quite a feat to make a movie like this and not have some producer or test audience bemoan the lack of a male love interest. Luckily, this movie was made before people felt the need to Twilight up everything, and while I don’t begrudge Twilight its success or its romance, it is much more interesting to watch a movie about two women and their relationship with each other rather than having to deal with some superficial and unbelievable love interest. There’s a lot in this film that is similar to the later Red Riding Hood, with the biggest difference being that one is genuinely interested in its female characters and the other is more interested in forcing a romantic triangle into things and applying far too much hair gel for a remote village in the Middle Ages. While I actually quite enjoyed Red Riding Hood despite the ridiculous Robert Pattinson fauxhawk frontiersmen brooding their little hearts out, Ginger Snaps Back is a grimmer, grimier, and less tween romancy example of a similar stylized, dark fantasy world. I never believe the romance in Red Riding Hood. But Perkins and Isabelle are so good and have such chemistry with one another that I fully buy into them as sisters who would suffer anything for one another. Plus, Emily Perkins has possibly the greatest “Oh shit” face of all time, a wonderful mix of horror, disgust, exasperation, and nausea. I adore her endlessly.

I suppose I can understand fans of the first film being disappointed that this third and presumably final entry in the series is such a departure from the tone of the original. I happen not to agree with them, and while it is definitely a very different movie in some respects, it’s also still similar in that the core of the story is the love and loyalty between the two sisters. Ginger Snaps Back is haunting more than it is scary, and at times quite beautiful. The werewolves are rarely seen (though frequently present), but when they are glimpsed, they look pretty great (even though I miss the days when werewolves used to wear trousers). The finale is fantastic as well. When Ginger slowly opens the fort gates and walks in slowly flanked on either side by werewolves — that just a beautiful bit of scene creation. The finale is made more powerful by the fact that, with a couple exceptions, no one really deserves to die. Like the sisters, they are just caught up in a rotten situation and have to pay a price. So true, this movie isn’t like the first one, but if you are less interested in “another Ginger Snaps movie” and more interested in a classic style werewolf movie, give this one a go. I was quite pleased with it.