You know, some days I have to try and find serious, thoughtful comments to make about films. Other days I get to reviews films like Zombie 3 and this little gem from the collective minds of Lamberto Bava and Dario Argento. Lamberto, of course, is the son of Italian horror legend Mario Bava, who gave the world some of the most acclaimed horror films of his day. And few horror fans need an introduction to Dario Argento, the man who revolutionized horror and suspense films, the man who directed such genre classics as Suspiria, Deep Red, and Terror at the Opera. Put these two together and you could only create something amazing, right? Well, maybe. Unfortunately, Lamberto Bava is to Mario what Lon Chaney Jr. was to Lon Chaney Sr. The end result of the Bava – Argento collaboration is just like what happened when Lou Reed of the Velvet Underground teamed up with Kiss. You expect incredible things. You get The Elder.

And yet, just like The Elder, no matter how bad the art gets, it remains strangely compelling and engrossing. There are days when I simply cannot stop listening to The Elder. And there are days when I absolutely cannot resist popping in either Demons or Demons 2 and indulging in some of the best/worst horror film making Italy has to offer. The original Demons offered up some terrible acting, a ridiculous plot, and plenty of nice special effects and gore. It was a mess that managed to entertain despite its own incompetence, thanks entirely to its frenetic energy and willingness to just do any damn thing it could think of. Having created such a delightful piece of garbage the first time out, Dario and Lamberto decided “What the hell?” and went at it again with this quickie sequel that lacks all the coherence and logic of the original. Yes indeed, you read that right. Reviewing films like Demons 2 is what this site is all about, and it is with no small amount of glee that I sink my teeth into the strange and wonderful carcass before me.

So let’s begin, shall we? The action takes place, for the most part, in a super state of the art high rise apartment complex that you know is just destined to malfunction in some way. As if cramped quarters, artificial settings, and being a death trap in case of fire aren’t enough to deter fools, then they should at least note that these places seem to be a favorite stomping ground of vengeful poltergeists and other things that go bump in the night. I try to warn them, but they never listen. But then, I guess the world is probably better off with a few less obnoxious rich yuppies. So move right on in, folks! These places are great! Nothing is more awesome that emergency exits that can be permanently locked by a computer error. 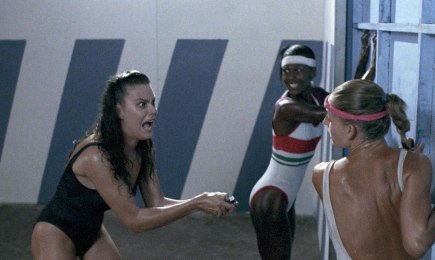 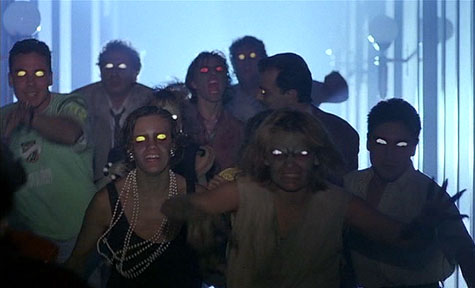 Anyway, since it is set in a building full of obnoxious rich yuppies, it’s no big surprise that the main cast is a cast of obnoxious yuppies. Meat for the beast, as they say. You have the annoying rich girl and her equally annoying friends all together for a long night of whining and partying. You have “the good couple,” who I suppose we’re supposed to root for. Those are your main folks, but Bava peppers the show with assorted other characters, one of which is a young Asia Argento. Another is a gym full of shiny body builders and aerobics instructors. And there’s this whole weird bit with some loud and wild punk rock types — are they the same carload from the first film? Who can tell? Italian movie punks all look like Nicholas Cage from Valley Girl. From time to time the movie cuts to scenes of them “on the way” tot he party, since rich yuppie girls always have a secret carload of punks as friends, so they can freak out their parents at the mall. The punks eventually get to the apartment building then wreck, and are okay, but that’s that. Shouldn’t they do something? Like be a part of the movie? I don’t know. You will learn not to ask questions about this film very quickly.

The movie begins with allusions to part one and that time when demons erupted unto the plane of man. In what appears to be the NBC Sunday Night Mystery Movie, the film recounts via dramatic re-enactment how the area where the demons showed up was cordoned off and turned into a “forbidden zone.” Only it’s not so forbidden. The walls enclosing the no man’s land are about eight feet high and lined with convenient stairs and ladders. There are no guards or anything. The wall to contain the ultimate evil of all time seems about as effective as your average chain link fence. 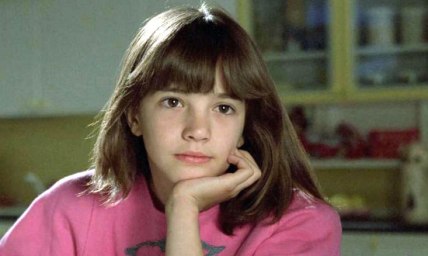 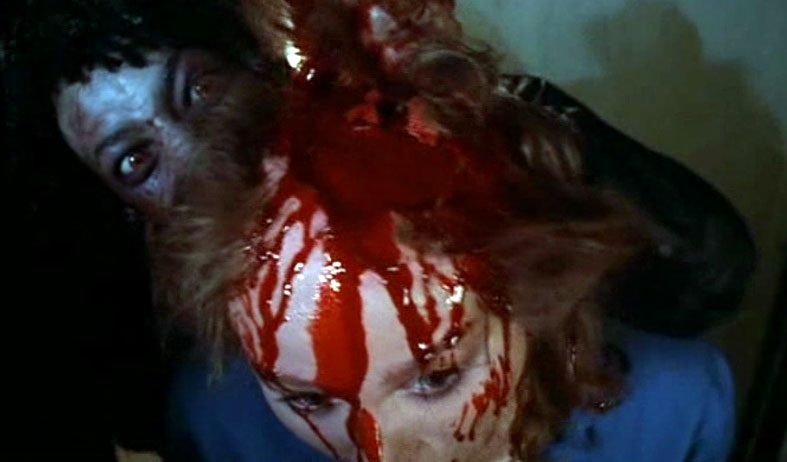 It actually reminds me of the fence around this prison that was not too far from my home when I was growing up. It was the Luthor Lucket Correctional facility in LaGrange, Kentucky. My friend and I were wandering around in the woods, doing our usual bit of local exploration (we found no demon corpses). We came upon an old fence that had collapsed in many places, and pretty much just rusted away. It took little more than a step over it to get by and continue our trekking. We came upon a field and could see, off in the distance a ways, a line of prisoners and guards. We realized then that the fence we’d stepped over was the perimeter of the prison. Anyway, back in the movie some nosy types decide to go on a photo shoot in the forbidden zone. What is it with Italian photographers and places of eternal evil? Do you realize how many Italian horror films involve photographers and models trapped inside places of ancient evil? Don’t these people have studios or something? Anyway, they wander around the wasteland a spell before finding a demon carcass.

In a confusing twist, the entire series of events is on television and being watched by the rich girl having the party back in the fancy apartment complex. In fact, it seems like every single person in the building is watching this piece of shit movie or reality show or whatever it was. It would be like if I walked out into the hallway of my apartment building and everyone was sitting around watching Demons 2. Or how I used to walk out of my room in my college dorm and every single person would be watching Star Trek: The Next Generation. The movie or documentary, or whatever it is, is narrated by the same guy that narrates all those old 1970s Bigfoot documentaries where they reenact Bigfoot coming down off the mountain to shake a trailer home and howl. 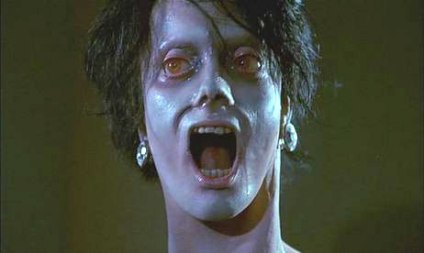 A drop of blood resurrects the demon, who makes short work of the trespassing photographers then promptly turns around and leaps out of the television to possess the rich girl. Mmm-hmmm. I assumed that the thing on television was a fictional movie, so this fictional representation of the real demons from the last film suddenly gets actual demon powers and leaps out of the television. But just the one television that the one rich girl was watching. The girl then attacks all her party goers. So we have demons! The building, as must always be the case, becomes sealed up tight. Even the glass in the windows can’t be broken. Demons are running wild, and the only people who can fight them off are some yuppie with a pregnant wife and shitty taste in interior decoration, and a room full of greased up body builders. I know who I’m throwing in with. The movie is pretty much just people running up and down the halls or hanging out in the parking garage until someone gets their face ripped off. In a strange sequence that is indicative of the whole film, little Asia Argento is hiding in a car while her dad (in the movie, not Dario, though that would have been awesome) and the body builders try to kick some demon ass. The fight is so so, with the demons eventually winning. They sort of look at Asia in the car, and then they all go running away, giggling evilly. Huh? I kept rewinding it to see if I missed something. 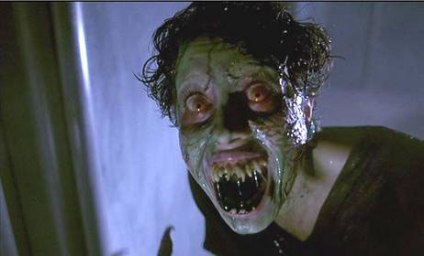 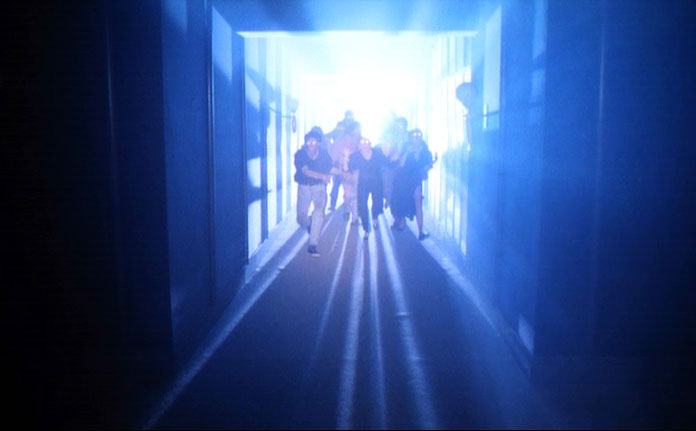 Then I realized if you worry about every time this film makes you go, “Wait a minute. What the hell just happened?” you’d be rewinding every scene. This film makes Lucio Fulci films seem like well thought-out studies in film logic. Nothing makes any sense at all. You can’t interpret it. You can only enjoy it. Which I did. Make no mistake about it. This film is weird and not altogether competent. Even in the uneven world of Italian horror cinema, where fans are generally very forgiving, this film can turn people off in droves. But it is a mess in much the same way After Death and Zombie 3 are a mess. They’re damn bad in such a wonderful way that you can’t help buy enjoy every second of their staggering ineptitude. I mean, there’s bad films, there’s really bad films, and then there’s Demons 2.

To the film’s credit, it does pack in the goo, slime, and gore you expect from a film of this calibre. Although there’s nothing really different than what we saw in the first film, it’s still flashy and stylish. And the pacing is good, although you’re pacing yourself on a race straight toward a solid brick wall. This movie may do a lot of things, but it never bored me. It did confuse me, but so does physics and that’s the most fundamental thing in the universe. What was with that carload of punks who seemed like they would be involved in the movie somehow? What about the fact that basically the film ends with two people getting out but all the demons still running wild? What the hell was going on with Asia Argento? What the hell was up with the demon coming out of a movie? And then it hit me. Amid all these testaments to the film’s incomprehensible state, I realized what genius it was. You see, the movie totally blurs the lines between fantasy and reality. Yes, that’s it. It is a film within a film, a film where in fact the demons may very well come out of your own television while you are watching them come out the television on the television. The complexity with which the overall structure is crafted is staggering.