I cannot count “point of view” films among the styles of film making for which I possess much tolerance. Aside from rarely being the least bit convincing as “found footage,” relying as they do on the conceit that assorted people would continue to film an incident long after the extreme danger factor would move just about any human in the world to put down the camera and run, there’s just not too much about them that I find appealing. They’re too jittery, too shallow, too… well, obnoxious. The POV films I’ve seen to date have either proved to have remarkable little staying power (The Blair Witch Project, ground zero for this trend, was fun the first time when I knew nothing about it but becomes less impressive after that) or were simply unwatchable from the get-go (Diary of the Dead). Maybe if they spent less time on characters bickering and screaming “What is that???” while flailing a camera around, I would warm to them.

When Troll Hunter first showed up on my radar, I can’t say I was all that enthusiastic about tracking it down. I mean sure, the plot sounded interesting — a covert government organization whose sole purpose is to control Norway’s not-entirely-secret population of trolls — but the fact that it was yet another “found footage from a crew of film student documentarians” turned me off. However, people I trusted suggested that maybe this time I might find things to be different. Even then I was hesitant; people told me the same thing about Cloverfield, and that didn’t really pan out for me. In the end, no amount of misgiving was going to actually prevent me from watching a movie about a harried bureaucrat who has to deal with renegade trolls, especially when I saw that the trolls were rendered not as some terrifying new style monster, but as the big-nosed, lumbering galoots they’d always been drawn as in old fairy tales. And it turns out that this time it paid off. 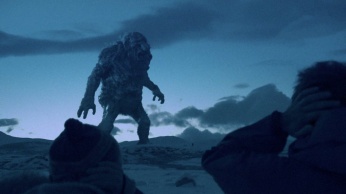 Troll Hunter is not a perfect film, but it’s a very entertaining film. It rises above the “point of view” nature of the filming, thanks in part to the fact that much of it is a satire of the style — albeit an extremely dry, straight-faced satire, which is the best way to go about such things. If you have to draw attention to the fact that you’re being satirical via the use of overt winks at the camera, you have failed as a satirist. Apart from that, it also succeeds because for once the film student “found footage” that comprises the movie looks like it was shot by actual film students — you know, people who are trying to set up and properly frame a shot while holding the camera steady instead of every single frame looking like it was filmed with the camera strapped to one of those vibrating machines that was supposed to help fat people in the 1970s jiggle off their weight. There’s still more of the “flail the camera wildly as we all run in terror” shots than I’d like, but there are a lot less than usual, so I guess that’s something.

As is the case with most of these movies, the premise of the film is that the footage we are watching was shot by a group of film students who mysteriously vanished, though their footage was somehow discovered and edited into this finished product. The film makers in this case start out shooting a documentary about hunters searching for a bear that has been wreaking havoc in the Norwegian countryside. They soon notice that one of the hunters, Hans (Otto Jespersen), keeps to himself and seems to be going about an entirely different mission than his fellow hunters. The rest of them dismiss Hans as a scummy poacher, and the film makers decide he’d be a more interesting subject than most of the gun-toting yahoos they’ve been interviewing.

At first Hans is, not surprisingly, somewhat unenthusiastic about the crew’s interest in him and does his grumpy best to shoo them away. When it becomes obvious that they’re going to keep pestering him, he basically says “screw it” and tells them everything: he’s not a poacher, and there’s no bear. He’s a government agent, and the damage is being caused by a renegade troll. Irritated by the bureaucracy in which he works, and annoyed by the way he’s been treated by his superiors, Hans holds nothing back. The film makers assume, of course, that he’s bat shit insane but obviously can’t pass up the opportunity to ride shotgun when Hans goes troll hunting. Which is when they learn that everything he’s told them is true.

Generally, the trouble with trolls is minimal, and Hans and the organization for which he works don’t understand why the trolls are suddenly running rampant and out of control. Hans does his job, but he’s not particularly happy about killing so many trolls. He wants to figure out what’s happened to rile them up. Throughout the narrative, mostly through interviews with Hans, the mythology of trolls is doled out: they love to eat rocks and old tires, they can smell the blood of a Christian, and they come in a variety of shapes and sizes — from largish under-the-bridge style trolls to massive, Godzilla-sized mountain trolls.

The trolls themselves are rendered via CGI that makes them look almost like stop-motion animation,and for the most part it’s an example of CGI actually succeeding. Most of the effects are wonderful, and they’re aided by the fact that much of the film is shot in dim light or on bleak, snow-swept landscapes that help mask the short-comings of computer animation. Traditional troll folklore is also mixed in with the modern setting — power lines, for instance, rope off the troll reserves, as no troll wants to get near them. Explanations of troll mythology and habits is doled out with such straight-faced authority by Hans that by the end of the movie you’ll pretty much believe in trolls.

One of the worst things about point-of-view movies is the strange need of most of them to make the people behind and in front of the camera intensely annoying. Troll Hunter avoids this, giving us instead a cast of young characters who are generally likable and mostly believable. The mix of fear and joy they experience after their first run-in with a troll is charming, and for the most part there’s none of the on-screen sniping and bitching and nastiness to which so many other POV films seem addicted. Even when the characters do something dumb, it’s believable — like the guy who risks being killed by a troll because he was too embarrassed to admit to his friends that he believes in God, which in turns leads to a pretty good joke where they hire a new camera person, a Muslim woman, and then worry whether trolls can smell Muslim blood as well. 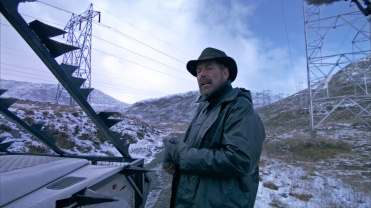 Norwegian comedy is, let’s say, subdued, and that works wonderfully when dealing with such a fantastical subject. The movie’s tone is pitch perfect, capturing the terror and exhilaration of the students when they discover that trolls are indeed real, the moroseness and tedium Hans feels as he fills out endless paperwork after a job is finished, and a subtle undercurrent of melancholy that these bizarre, mythical creatures have to stay on a reservation and are hunted if they stray from their approved territory. Had the film opted to be sillier, it wouldn’t have been nearly as effective.

Otto Jespersen, a former Communist radical turned controversial comedian (just look at the list of sacred icons he’s burned on stage!), plays Hans with a world-weary gravitas that totally sells you on everything he says, no matter how fantastic. Depicting troll control as a dreary bureaucratic grind is similar to the superhero deconstruction trend that’s been gaining momentum ever since people remembered Alan Moore wrote Watchmen, but writer-director Andre Ovredal handles it well. The secret organization he creates for the movie is utterly believable in that it’s totally banal, cluttered with tired employees and tons of requisition forms — it’s like Harry Palmer started hunting monsters. And pretty much all of it succeeds because Ovredal, Jespersen, and the rest of the cast absolutely refuse to acknowledge that they have their tongues in their cheeks.

The film’s one weakness is the ending, which is abrupt and doesn’t make a whole lot of sense as the ending, but I guess that’s the nature of “and then they vanished without a trace.” Luckily, the rest of the movie is an absolute delight, and any disappointment I felt over the ending is assuaged by the remarkably exciting finale involving a gigantic mountain troll. Seriously, watching that thing gallop across that dramatic, desolate Norwegian mountainscape — it’s really one of the best giant monster movie moments in a long, long time. By the time the end sputtered around, and despite the POV style, I was already a believer in Troll Hunter. This film may be the best giant monster movie I’ve seen since Gamera 2: Advent of Legion. It’s been a long time since I had this much fun watching a movie.