As has been and will forever be apparent, I harbor an epic number of obsessions, fetishes, and curiosities that provide me nigh endless material for exploring and exposing to the public. Among the ones that have yet to be mentioned is a fondness for movies about the French Foreign Legion. Not the modern one, with their modern weapons and uniforms. I mean the old one, with the white pants, blue coats, and kepis, marching through the desert because that’s what the French Foreign Legion does. Desert Sands is a high-spirited desert adventure in that style they only seemed to do in the 1950s, with plenty of dashing heroes, daring-do, romance, fiendish locals, and a French Foreign Legion battalion that seems much more like a British officers’ club. 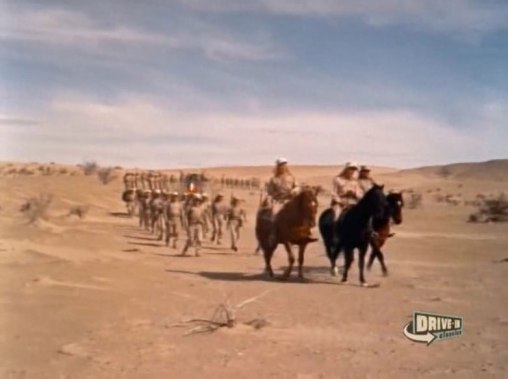 Although ostensibly set in the 1950s — one character travels by helicopter — most of the film seems to think it’s taking place fifty years earlier. Bedouin warlord El Zanal (Keith Larsen) and his sister Zara (Marla English) are hellbent on defeating the French Foreign Legion after Foreign Legionnaires kill their father. The beleaguered Legionnaires at a remote outpost (as if all Foreign Legion outposts aren’t remote) are desperate for reinforcements and relief to arrive, but all they get is a new commander, American David Malcolm (Ralph Meeker). Malcolm arrives just as tensions between Arabs and the Legion are coming to a boil. El Zanal has his sights set on taking over the fort. Even when he discovers that it was his uncle Jala (John Carradine) who killed his father and framed the Legion for the heinous deed, El Zanal decides to carry on with the attack, seeing himself as a uniter of the Arab tribes and conqueror of the French forces. Malcolm and his men do their best to resist, but after a pitched Zulu-esque battle, the garrison has no choice but to surrender.

El Zanal then devises a devious plan to allow the Legionnaires to continue to maintain the fort — unarmed and under close guard and threat of wholesale slaughter — so that when the relief column eventually arrives, they will not suspect what has happened, making them easy pickings for El Zanal’s fighters. The only problem with his plan is that El Zanal has apparently never seen an old adventure film. Otherwise he would know that his fiery sister is going to fall in love with the square-jawed Captain Malcolm and allow herself to be enlisted in the aid of the Legionnaires.

As with many low-budget adventure films of the era, there are certain allowances you have to make for a film like Desert Sands, not the least among them the idea that the heroes, looking back from our vantage point in a post-colonial era, are sort of in the moral wrong here and that El Zanal’s crusade against them seems justified. Hell, his whole plot to trick the approaching reinforcements would be trumpeted as clever and heroic if the shoe had been on the other foot and it was the white guys doing it. Personally, I am able and willing to divorce myself from such moral and political thorn bushes and enjoy the film as pure adventure, but I could certainly understand those who are not.

You also have to make concessions for the white-washed casting that defines such films. Actress Marla English is indeed beautiful (and a fun character for as long as she is defiant), but she’s about as Arabic looking as David Bowie. Similarly, her brother played by Keith Larsen seems less like the leader of a Bedouin uprising and more like a guy who got lost on his way to the Harvard polo grounds. Not that we don’t have a long tradition of well-educated North African rebel leaders, but as with Marla English, Keith Larsen is about as Arabian as his name. 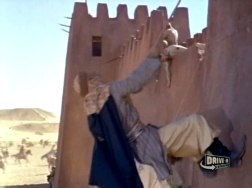 Such was the way of things in the 1950s. Thank goodness we’ve gotten over whitewashing characters and casting caucasians to play other races instead of giving actual members of those races a chance. Right??? Anyway, as long as you can roll with those peculiarities, Desert Sands is a entertaining if typical slice of mid-century adventure cinema. The low budget shows around the frayed edges. The desert fort looks like a repurposed western town, and I could swear some of the costumes worn by the Arab women are actually the sorts of dresses a film would slip on a Mexican peasant woman. But the cast is game and goes at the material with enthusiasm. For all his non-Arabness, Keith Larsen is energetic in a role that could have been much more complex but wasn’t, so what can you do? He gives it his all, though, summoning his best Alec Guinness and fulfilling the basic requirements of such a role. 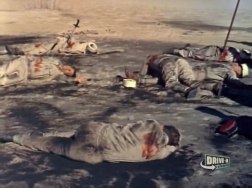 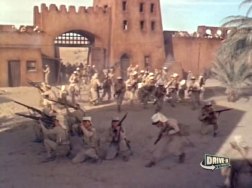 So too does Ralph Meeker hit all the requisite notes of the “hard-nosed but noble commander” and Marla English all the expected highlights of the “fiery and defiant woman tamed by the love of a good man.” Even in 1955, these were pretty well-defined character archetypes, and everyone here gives you exactly what is needed. Nothing more and nothing less. Meeker would get a chance to appear in a much more complex and nuanced war film a couple years later when he was cast in Stanley Kubrick’s Paths of Glory. Marla English had a brief career built seemingly on her resemblance to Elizabeth Taylor, but very little ever became of it. John Carradine, of course, is John Carradine, even if he’s obscured under layers of “Arab-face.” He plays his seedy backstabber as he should — like the skulking Svengali in any of those epic period piece movies featuring lots of throne room scheming.

If you don’t go in predisposed to loving B-movie adventure with all its formula and social pitfalls, then Desert Sands probably won’t make much of an impression on you except perhaps to inspire an occasional rolling of the eyes with its pro-Colonial stance and predictability. But if those things are something you can shrug off, and if you are already delighted by otherwise light and breezy adventure fare, Desert Sands is a lot of fun. The direction is solid, the script keeps a quick pace, the color photography is lovely, and the whole thing is a big, sandy bit of two-fisted fun. It’s a perfect if unspectacular Saturday matinee programmer that delivers action, intrigue, romance, and soldiers bravely singing and/or clinking booze mugs.