As we entered the 1980s and the dawn of the Reagan Years, we didn’t have much to worry about. Other than a recession, the ramping up of terrorism in the Middle East, the threat of nuclear war with the Soviets, and people popping the collars on their Polo shirts, things were pretty cool. With nothing to occupy our national sense of anxiety, we retreated into the realm of made-up, silly crap over which to fret and wring our hands nervously. The primary focus of our societal outrage and terror: heavy metal music. And more specifically, the role Ol’ Gooseberry played in its popularity. America’s collective hysteria over Satan and his sinister ability to seduce impressionable youths and bohemians into the folds of his cloven arms began in the late 1960s when hippies started dabbling in Occultism, witchcraft, sex magick and the occasional murder of Sharon Tate.

During the 1970s, several musical acts capitalized on this fear of the Devil and, mor lucratively, the desire of teenagers to piss off their parents. As we approached the 1980s, that mania hit a fever pitch when psychologists with dubious credentials started uncovering “repressed memories” in patients of abuse at the hands of Satanic cults. America went loony, and even though just about all the charges of Satanic cult abduction were later debunked, the Satanic scare was on — I guess he was an easier red menace to deal with than the USSR. The more authority figures and moral crusaders pushed against this perceived tide of devil worship and abominable music (in their defense, WASP was a pretty terrible band), the more popular youth culture pushed back, fortified by record and film producers who knew that a little controversy was always good for business.

Falling back on the age-old exploitation film tradition of tacking a cheap, hollow moral onto the end of a load of sleaze and indulgence, horror film makers turned the evils of rock and roll into a cottage industry. Sundry were the films in which heavy metal caused Satan, serial killers, or just some random dude in Alice Cooper make-up to pop up and start knifing scantily clad groupies and smug talent agents. Coming out in 1980, Terror on Tour was one of the first films to exploit adult fears over metal and horror-rock, though its early release date means it draws more from the Grand Guignol stage theatrics of KISS and Alice Cooper than the pentagrams and pantyhose of glam metal.

The Clowns are the hottest band in whatever Podunk town it is that would turn an act like The Clowns into its hottest band. Their potential rise to the national top of the heap of bands wearing black leotards, harlequin make-up and Mod Squad afro wigs is derailed when groupies start turning up dead back stage. The fact that the Clowns are all on stage while the murders happens more or less absolves them of suspicion despite the fact that the murderer is dressed as a member of the band, or possibly is just a back-up dancer from the “Krishna” number in Mithun’s Disco Dancer. The fact that the killer is disguised as a Clown is an assumed fact by all involved in the investigation despite none of them ever seeing the killer and, to the best of my recollection, there being no witnesses. Ehh, whatever. That’s the least of the film’s concerns. So who could the killer be? The nice roadie? The dick roadie? The weird manager with a stash of letters from his ultra-religious mom, berating him for being unclean and sinful? if you’re thinking this movie is going to throw a curve ball or surprise you with that revelation, well, you’re thinking more than the movie. 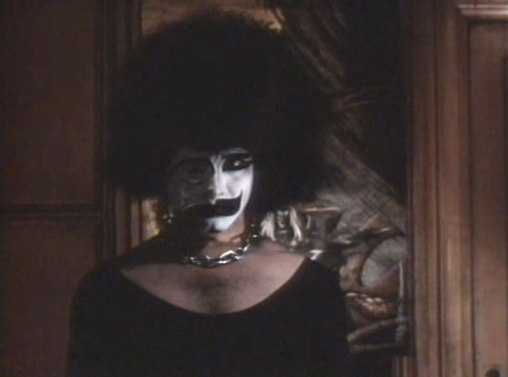 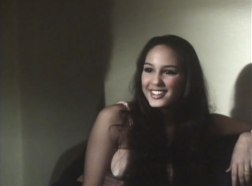 I’m not a huge fan of the slasher genre, but it can have its moments. This isn’t one of them. Coming out in 1980 means Terror on Tour was one of the earlier examples of the genre, something from before the template had been firmly established — though it had been established. John Carpenter’s Halloween was the prototype, and that came out in 1978. Friday the 13th was the genre’s Goldfinger — not the first, but the one that all others would mimic — and that came out in 1980 as well. Terror on Tour tries to cash in on the nascent slasher genre without trying very hard, and given how little effort most slasher films put into themselves, for one to get called out as being even lazier than usual is, I reckon, at least some sort of accomplishment.

Terror on Tour doesn’t just fail to effectively exploit the elements of the average slasher film though; it fails to exploit even the basics of generic cinematic narrative. There are no lead characters, no protagonist, and no one actually reacts to anything. Events happen, and then the movie ends, without ever trying to make us feel the least bit engaged or invested in anything it’s showing us. The victims are all anonymous characters introduced for the first time a minute or so before they get killed. The band members just sort of sit around and go, “Wow, this is bad. Oh well, time to hit the stage.” No one seems to react to these murders in any fashion approximating human behavior. I mean, the murders happen in the same place at the same time every night — how hard can these be to prevent? Just cancel the show — I mean, that’s a thing they do, right? When multiple murders following a predictable pattern happen at an event? Or if the show must go on, maybe the band could go one step further past expressing concern and not, you know, constantly arrange for groupies — the very population being murdered — to keep meeting them in dingy basement bedrooms beneath the concert hall. 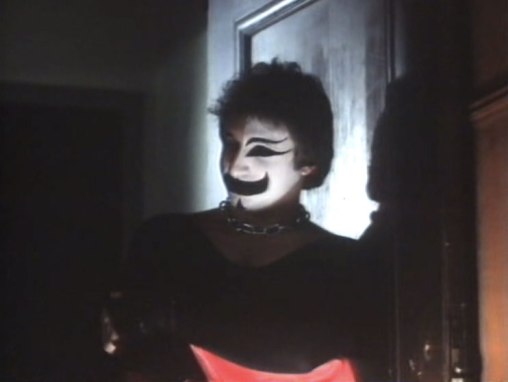 Luckily for the murderer, everyone here is an idiot — and let me say they are idiots even by the standards of slasher films — and whatever town this is only has a single cop, and his method of investigating these shockingly predictable murders is to stand around outside doing nothing. When the movie finally starts to flirt with developing a main character or “final girl,” it promptly loses interest in that as well, which is fair, since I did the same thing. At no point does this movie give you anyone to root for or against. Everyone just sort of sits around, and every now and then a woman taks her top off and a dude in a fright win stabs her. Even the dumbest slasher movie has enough sense (usually) to give us at least someone we are theoretically supposed to cheer on, even if that someone ends up being the killer. Not this one, though.

Director Don Edmonds was not an exploitation neophyte when he helmed this misfire. He cut his teeth on the Ilsa films, which are similar in a way in that they never really develop any clear protagonists. But they do develop one hell of a villain, and if Terror on Tour had bothered to do that, then maybe we would have had something onto which we could grip. But no; the killer here is just as drab and characterless as the rest of the cast. When Michael Myers can lumber around in an anonymous jumpsuit and emotionless mask and still out-act you, that’s saying something. The script, such as it is, was written by a guy named Dell Lekus. That he has only a single credit to his name is no shock, and his inexperience in obvious. I will sometimes make fun of writers who slavishly follow the Sid Field “Screenplay” model — but at least that works. I would have gladly bought Lekus a copy. 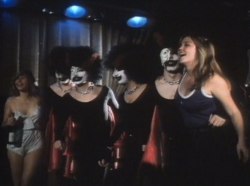 It doesn’t help that the make-up used by the Clowns, and thus by the killer, is ludicrous. Despite drawing inspiration from shock rockers like KISS and Cooper, what this film comes up with is absurd. The stage show, during which real women in skimpy outfits shimmy while the band decapitates mannequins and stages fake murders, is OK, but it’s all being perpetrated by guys in novelty afro wigs and make-up that is less KISS’ demon or The Misfits skeleton and more court jester with Luis Tiant mustaches. I suppose there’s an air of realism about it. I can imagine some local band trying to come up with something scary and freaky only to strut out on stage wearing a get-up like the Clowns. And truth be told, the Clowns aren’t a bad band, as far as movie bands go. I don’t know if I would buy their album, but if I did, I’d put it on the shelf next to my complete collection of Jon Mikl-thor albums.

So is there anything that can redeem this movie? You might think the silliness of the band’s costumes is good for a laugh, but that’s exactly what it’s good for: a laugh A single laugh, and you can get that from a screencap without having endure watching the entire movie. It does offer up a pretty steady parade of attractive groupies willing to doff their tops and writhe around, but you can get just as much and more from movies that aren’t this boring. So no, there’s really not much that can redeem Terror on Tour. It’s best moment is its video box art, so you are better off looking at that and not wasting time with the movie within. If you need a decent dose of rock ‘n’ roll horror, you are better off with pretty much any other example of the genre: Trick or Treat, maybe, or even Black Roses. Hard Rock Zombies, Rocktober Blood…hell, you are better off spending time with the aforementioned Jon Mikl-thor in Rock ‘n’ Roll Nightmare. Anything is going to serve you better than this dull thud of a film.