I have nobody to blame but myself. I mean, by now I should know that Hong Kong movies are not what they once were (i.e. good). And I should certainly know not to expect anything much from pop duo The Twins, a.k.a. Charlene Choi and Gillian Chung – I did, after all, suffer through their crummy vampire action mess The Twins Effect. So why in the Gay Blue Hell would I be interested in Protégé De La Rose Noire, their latest box office smash? Well, because one of my Hong Kong heroes, Donnie Yen, was the man behind the camera, and Donnie kicks ass. He was the action choreographer on The Twins Effect, and deserves the credit for making the mostly non-fighter cast look halfway competent. So maybe, just maybe, he could pull something out of the fire. Also of interest is that the movie features Donnie’s little sister Chris Yen, returning to the big screen for the first time since her debut in the little-known 1986 Yuen Woo-ping film Close Encounter With A Vampire. Still, I didn’t dare get my hopes too high, which is just as well because the movie still couldn’t live up to them. 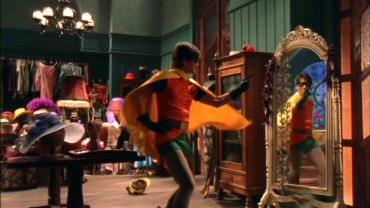 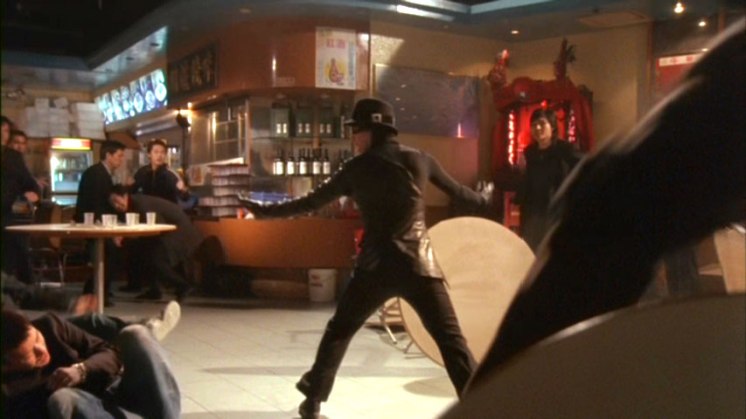 Black Rose is a character that appeared in a popular 60s film series. Over the years she’s cropped up in the comedic big-screen adventures 92 Legendary La Rose Noire (1992), Rose, Rose I Love You (1993) and The Black Rose a.k.a. Black Rose II (1997). Our current subject seems to be based loosely around 92 Legendary La Rose Noire, which featured two women (Teresa Mo Sun Kwan & Maggie Shaw) getting confused with the senile, retired Black Rose (60s star Petrina Fung Bo Bo) while a goofy cop (Tony Leung Ka-Fai) romances one of them. In Protégé De La Rose Noire The Twins take over as the two women, Teresa Mo is now Black Rose and the cop is replaced by a goofy cab driver. Oh, and somebody forgot to bring the plot.

Gillian (Gillian Chung) is a mousy honour student who becomes uncontrollably violent when anyone says her full name. Charlene (Charlene Choi) is a complete headcase who is convinced she’s perpetually pregnant and thinks she’s an alien. They meet while looking for a room to let and become friends. One day, while going for a job interview they meet goofy cab driver Jim Lo (Ekin Cheng), who they ‘hilariously’ re-christen J-Lo. He drops them at a crappy CGI mansion, the Rose Garden, where they fall victim to a booby trap and are hung – sadly, not permanently. 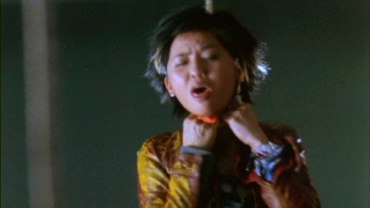 The House belongs to legendary crime fighter Black Rose (Teresa Mo), who has gone completely bonkers and kidnaps the girls to train as her replacements, so they can stop the villainous Poison Ivy (not the Batman one) and her all-female hit squad, the Ivy League. They call J-Lo on their cell phone and he breaks in to rescue them, not reckoning with Black Rose’s penis-severing robot Jacket. But having successfully entered the mansion and ruined his clothes in the process, J-Lo looks around Rose’s giant wardrobe for something to wear. Finding a Robin costume (this time it is the Batman one, not the bird one) he puts it on, only for Black Rose to confuse him with her old, long-departed lover – Robin apparently came to work for her after Batman failed to pay his salary.

The Twins, now Black Rose juniors, have their first encounter with Poison Ivy (Faith Woo), who turns out to be Rose’s estranged daughter. Though they fight her gang (a girl with guns, another with throwing stars and a badass kung fu schoolgirl played by Chris Yen) she escapes, and it’s clear that the girls need more training. So they immerse themselves in a quick parody of the Jackie Chan classics Snake In The Eagle’s Shadow and Drunken Master, which gives them the kung fu chops to beat Ivy and her gang and save the day. The End.

It’s at this point I’d typically offer my opinions on the film I’d just described, but I’m finding it extraordinarily difficult in this case. That’s because this isn’t really a film at all, but more of a game of dress-up that a couple of 12-year-old girls with access to their mum’s wardrobe might have. The Twins pull faces, The Twins dance around a bit, The Twins put on funny clothes and makeup that’s too old for them, The Twins talk about boys and giggle a lot. Somewhere in amongst that is about 5 minutes of plot and a further 10 of the goofy comedy stylings of Ekin Cheng. But all of that does not a complete film make, especially if you don’t find eyeliner and feather boas interesting.

So what is Hong Kong hard guy Donnie Yen doing directing this mess? Well, one wonders just how much work Donnie did on the project since he’s credited alongside another director, Barbara Wong Chun-Chun. Wong is a relative newcomer to the HK movie scene, having made two films; the 2001 documentary Women’s Private Parts and the comedy Truth Or Dare: 6th Floor Rear Flat. Given that I’m unfamiliar with her other work I have no problem with laying the blame for Protégé De La Rose Noire’s vast reserves of suckage entirely on her shoulders. Donnie presumably came in for the few minor action scenes, which have their moments – Chris Yen, playing a character apparently inspired by Kill Bill’s Go Go Yubari, is clearly just as skilled as her brother, but she inevitably has to keep the best of her skills in check in order to face the non-martial artist Twins. Hopefully she’ll go on to better things – there’s a nice piece on her at Kung Fu Cinema, if you’re interested, including a link to a clip of her best fight. That should at least save you from having to watch this movie. 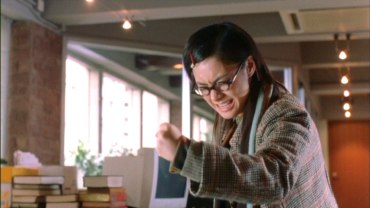 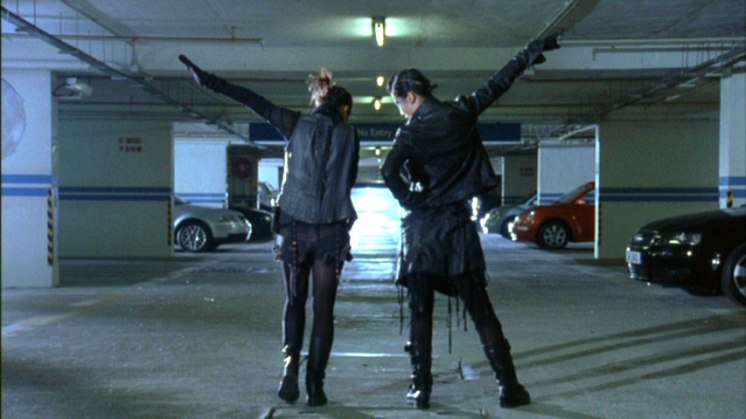 So the acting is more or less a bust too, right? I’m afraid so. First there’s Teresa Mo, one of Hong Kong’s biggest stars in the early 1990s (you may remember her as Chow Yun-fat’s love interest in Hard Boiled). She left the industry and moved to Canada in the mid-90s, but recently returned to Hong Kong and took up acting again. Frankly if this is the standard of her work these days she needn’t have bothered. As for Ekin Cheng, his trademark long hair has gone (presumably because it keeps out-acting him) but he’s still Ekin Cheng. If you like him, I guess you’ll like him in this. It’s the only time you’ll see him dressed as Robin, anyway.

So apart from Chris Yen, does the movie have any redeeming features at all? Just one: gorgeous newcomer Faith Woo. Though she’s onscreen for barely five minutes, she manages to be vaguely menacing as Poison Ivy. Not only that, she makes a Hell of an impression doing kung fu in only heels and a pink bikini, and at the end of the final fight is given an extended spanking while clad in PVC chaps. Mmmmmm, spanking… Sorry, what was I saying? Oh yes, and she acquits herself reasonably well in the action scenes, getting in some nice old-fashioned wrestling moves. One to watch. 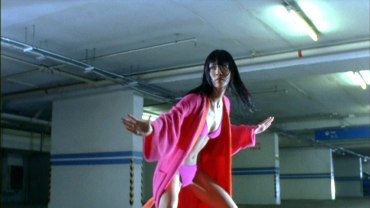 But wait a minute, isn’t this a comedy? Shouldn’t it be judged on how funny it is? To which I say, yes it should. And it isn’t. Funny, that is. For example, at one point Teresa Mo bursts into song – something that is apparently a staple of the Black Rose films. The joke is that The Twins, who are music megastars, sing out of tune. Oh my aching sides. And this is about as good as it gets – there’s even a Matrix joke, something that was tired when people first started doing it a dozen years ago. The irony of a Hong Kong movie ripping off a movie that was ripped off from Hong Kong movies is not lost on me.

I guess I shouldn’t have expected much from this flick, having been so disappointed with The Twins Effect. But Protégé De La Rose Noire makes The Twins Effect look like The Exorcist. It’s just another nail in the coffin of the once mighty Hong Kong film industry. Pretty much every film I’ve seen from Hong Kong recently has made me less inclined to see the next one. And there’s very little light at the end of the tunnel, when one considers Donnie Yen’s next film – Twins Effect 2.

I mean really. Why do I bother?