Back in the 1980s, American pop consciousness got really obsessed with the Vietnam War. Serious questions about what the war meant to the American psyche manifested in a variety of mediums, none so readily exploitable as film. And film, like Bo Gritz, became obsessed with exploiting the notion that American POWs were still being held captive in Communist Vietnam. Gritz, amid a flurry of self-promotion and with a team comprised at least partly of bikini chicks wearing t-shirts about how awesome Bo Gritz and his howlin’ commandos were, set up shop in Thailand and began crowing about mounting rescue expeditions. Dealing with a KIA family member can be devastating; dealing with an MIA is often even worse. As far as I know, Gritz never actually amounted to much other than a huckster, and although Vietnam began a program of finding and returning remains of American servicemen, there was never any secret cache of POWs discovered. But the idea had taken root, and once that idea took root, American cinema was quick to send a seeming endless parade of would be heroes who didn’t fight in the actual war to win it for us after the fact in make believe. Uncommon Valor was the most respectable. Rambo: First Blood Part II was the most iconic.

And Ultimax Force is the movie that asked the question: what if Rambo was ninjas?

In retrospect, I cant believe it didn’t happen more frequently. I mean, combining the American obsession with ‘Nam movies with the American obsession with ninja movies — that just seems like common sense. I’m surprised Cannon, who were kings of both genres, didn’t just spontaneously spawn a dozen movies about ninjas saving POWs without even having to commission the production of them. As far as I know, ninja and “rescue the ‘Nam POW” movies just appeared magically overnight in Golan and Globus’ office, created presumably by a team of elves who had little else to do ever since they helped make that cobbler rich. At the very least, you’d think Godfrey Ho would have gotten in on the action.

Surprisingly, though, there were very few movies that thought to take the proverbial American ninja and plop him down in the middle of a ‘Nam POW movie. Godfrey Ho was too busy splicing ninjas into movies where guys with mustaches fought other guys with mustaches in the jungles of The Philippines, but this was always over the drug trade. So the potentially ripe field of movies about ninjas rescuing POWs from the clutches of the VC remains sadly under-exploited. 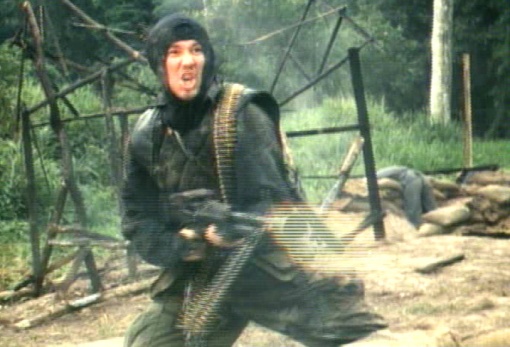 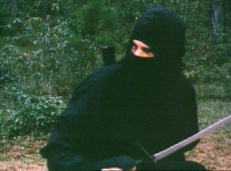 However, if you have to have a sole example of the genre, Ultimax Force is as good as you’re probably going to get. It has pretty much everything a “ninjas meets Rambo” movie needs. The plot is pretty bare: four ‘Nam vets who also happen to be ninjas are asked by their old master to rescue one of their ninja brothers, languishing still in a VC prison camp. With that groundwork laid, you get what you need from such a film. There’s a bar room brawl, a cute Vietnamese woman played by a Chinese woman who assists the heroes, a lot of exploding huts, guys falling out of guard towers, sadistic prison commandants, dudes doing the exaggerated “I’m getting peppered with machine gun bullets” dance, and lots of walking or boating through the jungles. Plus the heroes, when they aren’t dressed as ninjas, wear the requisite 80s American adventure wear: acid washed jeans cuffed tight around the ankle, white sneakers, loose fitting checkered shirts with the sleeves rolled up to the shoulders, and of course, headbands. They look like their “rescue mission” checklist included “sharpen ninja swords, to some push ups, stop by Chess King.”

Aside fromt he requisite notes, Ultimax Force does a couple things a little different from your standard Namsploitation movie — apart from, you know, ninjas. Chief among these is the fact that the rescue mission is a dismal failure. Once the prison commander gets wind of a bunch of American ninjas heading his way to liberate the POWs, he just guns down all the prisoners, including the ninjas’ brother. There you go. Problem solved, though it lacks the panache of some of the more flamboyant sadistic prison commanders, who would keep the prisoners alive but do something like crucify them or put them in those half-submerged cages full of leeches. So points off for style, but I guess you can’t argue with the effectiveness of the more mundane “I’ll just shoot ’em” approach. James Bond is lucky he never ran into this guy. There’s also no talk of government conspiracies or corrupt American businessmen and officers colluding to foil the rescue mission.

Ultimax Force is a pretty low budget but enjoyable trash war film. It delivers on the action and exploding huts and doesn’t bother with much else. While Italian ‘Nam movies are often full of ripe, ridiculous dialogue, Ultimax Force (pretty sure it was Filipino) offers almost nothing in the way of cornball lines. It sticks mostly to gratuitous name calling and those tortured insults that are too convoluted to have come from the mind of a native speaker of English. And the plot is as thin as the dialogue. This isn’t a movie that has a lot to say. Like the ultimax force itself, this movie has a job and gets it done as quickly as possible. It’s only about 80-something minutes long, and most of that time is spent on the point: ninjas mowing down VC. I appreciate that they keep this one lean and mean, especially after more meandering, twisty movies like The Last Hunter.

The actors here have worked hard to be completely emotionless, even when they’re supposed to be screaming vengeful, “I’ll get you, you fucker!” proclamations. One of ninjas harbors considerable racist rage against the Vietnamese, but this is never explored as anything more than an excuse for him to get to say things like “slant-eyed mother fucker.” A couple of the other ninja are whiny “dude, let’s just go home and forget this” sort of guys, which while understandable, doesn’t make them particularly compelling adventure heroes. When people fire machine guns, they just make half-hearted yellface and wave their machine guns around wildly, somehow managing to hit people despite their technique looking similar to just flailing a garden hose around. And also, for some reason, the machine guns make pew-pew-pew laser noises. Heroes also die for no reason other than they do incredibly stupid stunts for no reason. Case in point — one guy swan dives off a bamboo platform into the waiting throngs of well-armed VC, who shoot him all to hell before he finally reveals he was also holding a grenade that kills a couple guys. Why wouldn’t you just throw those grenades from cover? Why the swan dive?