Nostalgia. It’s a dangerous thing, especially when applied to something you haven’t encountered for over 30 years. Take, for example, my favourite TV show as a kid; I lived and breathed The Six Million Dollar Man. I had two different Steve Austin action figures (one with a grippy hand, one without), a rocket ship thing that folded out into a bionic surgery table, some sort of evil robot with a claw and interchangeable face masks*, and even a Jamie Sommers action figure (it was not a doll. Shut up. SHUT UP!). I would spend hours during school playtimes attempting to run in slow motion while making the nininininini…. noise. I’m sure I looked like a complete buffoon, but I didn’t care.

And oh man, what a show that was! I remember every episode being a breathtaking thrill ride, as The OSI battled to stop megalomaniacs trying to use atomic bombs to blow up space stations full of more atomic bombs, while Steve Austin wrestled a robot yeti with laser eyes that also contained an atomic bomb. And between being about six and thirty-six, I never saw The Six Million Dollar Man again. Imagine my disappointment, watching re-runs on SyFy, to discover that Steve spent most of his time helping pretty divorcees in lumberjack shirts fight off evil logging companies in bland-looking (and above all cheap) forests. 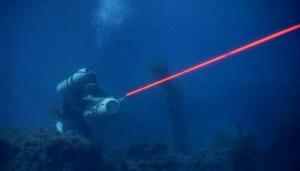 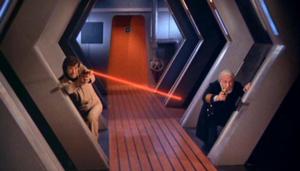 The Amazing Captain Nemo was an attempt by Irwin Allen to graft some Star Wars-style laser and robot action onto an underwater adventure, and was originally made to serve double duty as both a movie and TV mini-series, the latter shown as The Return of Captain Nemo. This wasn’t uncommon in the late 70s; As I hinted above, my first exposure to both Buck Rodgers in the 25th Century and Battlestar Galactica was in the form of movies that were edited together from episodes of the show (in fact Galactica managed to knock out three of these, including one based on- the Lords of Kobol help us – Galactica 1980). I have a recollection so vague of seeing the TV version of Nemo that for a long time I assumed I must have dreamed the whole thing. 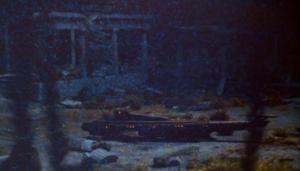 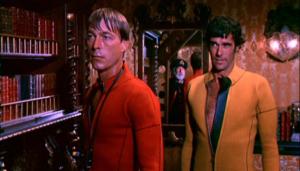 There’s this mad scientist called Professor Cunningham… Let’s just hold it there. Professor Cunningham? That’s what you call a guy whose name strikes terror into all those who hear it? Because that’s not even trying. I’m not suggesting going completely overboard and calling your antagonist Dr. Maim or Count Torture or something, but Professor Cunningham sounds like an avuncular college professor. And – unfortunately – he looks like one too, seeing as he’s played by Burgess Meredith in a costume of grey slacks, grey grandpa cardigan and loose black tie. He’s absolutely not the guy who you expect to be commanding a killer submarine full of robots, and ordering around a 7-foot tall gill man in space armour called Trog or Tor or something. But that’s exactly what he’s doing. The submarine is called The Raven, and looks like a kit bash of a couple of pipes with a Space: 1999 Eagle transporter. It has this really amazing weapon called a Delta Beam, which can apparently blow up whole islands, but for some reason Cunningham instead threatens to destroy Washington using an old-fashioned nuke.

Meanwhile, during some stock footage of naval manoeuvres, a couple of divers make a startling discovery. Commander Tom Franklin and Lt. Jim Porter happen across a mysterious submarine. When they investigate further, they discover it is the Nautilus, and the famous Captain Nemo (José Ferrer) is still aboard in suspended animation. There’s not a whole lot to say about Tom and Jim except that they helpfully wear different coloured wetsuits so you can tell them apart. They are played respectively by Tom Hallick and Burr DeBenning, who look like they were created in a lab from the DNA of Tom Wopat and Larry Wilcox just to be on 1970s TV. 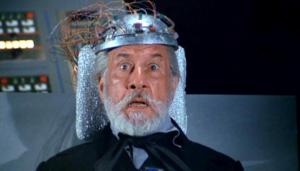 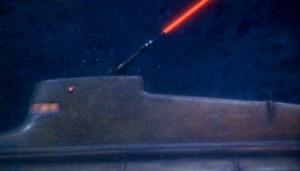 Tom, Jim and their boss Miller (Warren Stevens) convince Nemo to use his genius, and spiffy art-deco sub, to help them take down Cunningham before Washington is destroyed. While a little annoyed that this will divert him from his true goal – searching for the fabled Atlantis – Nemo agrees. It’s a bit of a coup for the good guys since the Nautilus has all kinds of amazing technology years ahead of its time. It has a laser cannon and a nuclear reactor, or at least that’s what Tom and Jim call them, setting up the old chestnut of Nemo snapping “that is only what you call them in your modern futuristic parlance you young whippersnappers you!” or words to that effect.

Nemo tracks down Cunningham fairly easily, and having temporarily neutralised the delta beam, swims out to say hi. No, he really does: he and Tom scuba over to the Raven so that Nemo can ‘look his opponent in the eye’ or some such guff. It’s mostly so Ferrer and Meredith can do a bit of scenery-chewing and we can have a brief underwater laser battle as the good guys escape. I have to say, I really love that someone looked at the exciting shootouts in Star Wars and thought, ‘I wish these were slower and more ponderous, like Thunderball.’ Anyway, the Nautilus uses its laser (or focussed light projecting fabtraption, according to Nemo) to shoot down the nuke, and that’s the end of episode 1. 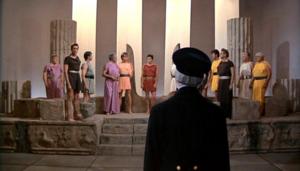 In order to refuel, Cunningham drills holes in some barrels of nuclear waste that the US has dumped in the ocean. The release of radiation threatens to be catastrophic, so once again the Nautilus is pressed into action to save the day. First though they must take on board an expert in, um, leaking radioactive barrels, I guess. This is Dr. Cook (Mel Ferrer) and his pretty-ish assistant/girlfriend Kate (Lynda Day George). Dr. Cook doesn’t add much to the story, except that he’s actually a traitor in league with Cunningham. He sabotages the Nautilus, though Nemo figures out who the culprit was instantly. But Cook has another trick up his sleeve… a sword cane.

Yes, honestly, that’s his back-up plan. He attacks Nemo, who apparently forgets he has a whole crew of armed officers so that the two Ferrers can have an old-guy sword fight. Cook is killed, and Nemo tricks Cunningham into blowing up an undersea cliff to bury the nuclear waste and saving the day. Oh, and there’s some business with the Nautilus getting stuck in a minefield, but it’s dealt with rather quickly. And that’s the end of episode 2. 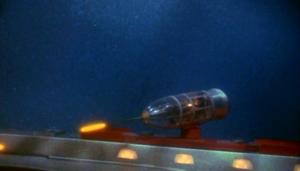 For the big finale, Nemo finally discovers Atlantis, which looks pretty much exactly like you’d expect it to: Greek columns and acropolises (acropoli?) and so forth. Then a guy in a toga swims aboard, and declares he is King Tibor (Horst Buchholz), the head honcho of Atlantis. He tells Nemo that having been betrayed by a previous visitor who claimed to have peaceful intentions, the crew of Nautilus will be tried and judged by the Atlantean council. Sort of makes you wonder, if your nation is attacked by a treacherous enemy and you get all suspicious of visitors, why you’d send the king out by himself to make contact. Never mind, he’s got a toga so he must know what he’s doing.

Anyway, Nemo is able to convince the council he’s an OK guy, and returns to the Nautilus with Tibor and a couple of others. But they find the crew frozen, Tom (or is it Jim?) missing, and the ship inoperable. It’s Cunningham again of course; he’s using a mind-control device to overpower Jim (or is it Tom?) and the Atlanteans, and now intends to drain all of the genius ideas from Nemo’s mind. And also use some ball bearings to destroy all the cities on Earth, or something. And naturally it was he who previously conned the Atlanteans. While strapped into Cunningham’s brain-draining machine, Nemo cleverly remembers some footage from earlier in the movie, allowing Tom (or possibly Jim) to break free of Cunningham’s control. They escape, treating us to a slightly more elaborate underwater laser fight, before the final battle between the Raven and The Nautilus. Which isn’t terribly exciting, to be honest, but does end with an explosion. And then Captain Nemo promises never to return to Atlantis. And that’s the end of episode 3. 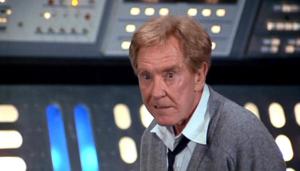 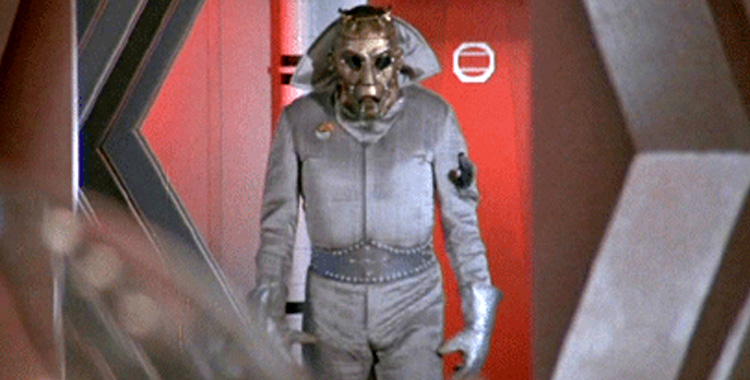 The Amazing Captain Nemo is a frustrating experience. The episodic structure means that there’s no real through-line of plot to get resolved, and as soon as a problem presents itself, it’s fixed immediately. Plus the removal of a fair chunk of footage from the longer TV edit also causes a number of problems. Character development is non-existent, and presumably the lost scenes would also help fill in some troubling holes in the story. For example, what’s the deal with Cunningham’s weird mutant hench-thing? Was he supposed to be an Atlantean of some sort? Both he and and the toga-wearing Atlanteans refer to Nemo and his crew as ‘aliens,’ so I assumed a connection. There are also unfortunate continuity gaffes that presumably come out of the editing, such as when Nemo orders the Nautilus, last seen resting on the ocean floor, to “dive dive dive!” I’m guessing these gaffes are down to the editing anyway; the script might just suck. And don’t fall for anyone telling you Robert Bloch is responsible for the screenplay, as I assume his contributions were lost among those of the 6 other writers (not including Jules Verne).

So, The Amazing Captain Nemo is just-about-passable afternoon matinee entertainment, assuming you can roll with the ropey model FX (and honestly, how can these be so much worse than the ones in Allen’s earlier Voyage to the Bottom of the Sea?). Having seen it again, I can now say with confidence I didn’t imagine it as a six year old child, so peace of mind of a sort has been achieved. And I also now know for certain that even the addition of sweet laser-equipped scuba thrusters isn’t enough to make diving sequences interesting.

Now if you’ll excuse me, I need to go and find this old TV show I remember from being a kid. It had a guy with a metal hand that had all these interchangeable gadgets on it, and I’m completely sure it’ll still be awesome…

* The villain turned out to be Maskatron, as described here. I also had the radio back pack, which kind of sucked. I really wanted those critical assignment arms, but it was not to be…