The Devil’s Man is a really quite odd — not to mention staggeringly cheap — little Eurospy film from director Paolo Bianchini, the man who spoiled Superargo for everyone with his limp sequel to Superargo vs. Diabolicus, Superargo and the Faceless Giants. It’s one of those Italian genre films in which the actors walk through it as if in a dream, reacting to situations in ways that no human being ever would simply because that is either what the script required of them or because they were given no direction as to what a more sensible course of action might be (ad libbing was obviously outside the pay scale). Remember that scene in Nightmare City where the woman quite improbably stands stock still and screams while a zombie pokes her eye out with a stick just because that was what was required in order to pull off the cheap prosthetic effect? Well, I was going to say that that is representative of the degree of logic informing The Devil’s Man, but, on second thought, that at least makes sense on some level.

In the film, Luisa Barratto (billed here as Liz Barrett) plays Christine Becker, a young woman who arrives in Rome with her father, Professor Becker, a noted brain surgeon. Soon thereafter, the professor goes off to meet with a colleague and fails to return. Christine then spends some time wandering aimlessly around the city, running into a man dressed in a Santa Claus suit who is sitting by a fountain and then a sinister chestnut vendor, before going to the home of her father’s colleague, a gentleman by the name of Professor Block, to look for her dad. There she finds Professor Block murdered and her father missing.

Not long after that, a man who will later be referred to simply as “Mike” shows up on the scene. Christine stands by and watches wordlessly as he rifles through Block’s apartment, even though she obviously has no idea who he is and he has said absolutely nothing by way of introduction. Finally, Mike sees fit to address her, requesting that she not inform the police of this matter. This prompts Christine to in turn inquire as to Mike’s identity, though, quite nonsensically, she asks him if he’s a policeman. No, Mike tells her, he is a reporter, although nothing that Mike will do over the course of the rest of the film will support this claim. It is for this reason that The Devil’s Man today maintains its somewhat precarious foothold in the Eurospy genre (rather than — what? — the Euro-reporter genre?). Despite the nebulousness surrounding Mike’s identity and profession, his actions throughout the film are pretty much right in line with those of your typical Eurospy hero, with instances of teeth-bared machinegun strafing and cold-cocking of criminal minions outnumbering those of scribbling notes and phoning in copy by roughly a thousand to zero. 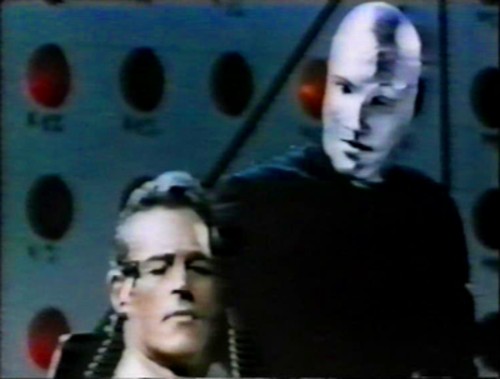 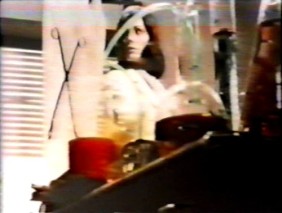 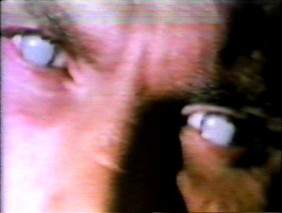 “Mike” is played by Guy Madison, an American cowboy star who saw his career’s second act play out in the world of 1960s European genre cinema. In addition to some espionage films, he appeared in quite a few spaghetti westerns, including some pretty good ones, such as Gianfranco Baldanello’s This Man Can’t Die. As far as his performance in The Devil’s Man goes, as with all of the other actors in the film, it’s difficult to make an assessment — as it is even to use such basic terms as “performance” or to say that anybody actually “played” anybody at all. The cipher-like figures who inhabit The Devil’s Man can’t really be said to constitute “characters” in any conventional sense, and, as such, playing them simply requires that the actors appear in front of the camera and rotely march through a few murkily-defined paces.

Eventually Mike and Christine’s search leads them to the North African desert, and the hidden compound of a masked supervillain who, in keeping with the stubbornly generic tone of the proceedings, is never identified by any kind of proper name. You might think that this villain is employing the mask to conceal his identity, and that we are in for a startling “reveal” at the film’s conclusion, when we will find that he has all along been one of the characters we were introduced to earlier in the story. But when the mask is removed, we instead find that he is just some anonymous guy whose face, for reasons we are never made privy to, is a little bit scarred.

Anyway, this villain, with the aid of a team of captured scientists, has concocted a synthetic superbrain which he now hopes to have Professor Becker implant into his head so that he can reign over the rest of us stupid people — even though stupid people have proven that they don’t necessarily always choose intelligent ones to be their leaders. Mike ultimately manages to bring mask guy down with the aid of a helpful tribe of nomads who, in a confusing riot of poorly shot action and mismatched stock footage, do battle with said villain’s army of milky-eyed zombie foot soldiers, ultimately bringing about, through entirely mysterious means, the required ka-boom of the amorphously defined (is it a castle? is it a cave?) supervillain lair. 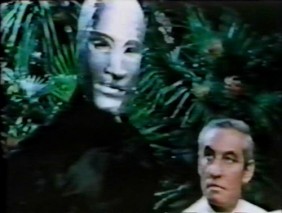 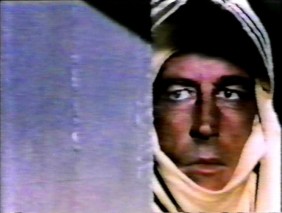 As alluded to earlier, The Devil’s Man‘s production exhibits an almost poignant level of impoverishment. It’s interior scenes are so tightly shot that, for all we can see, they could just as easily have been set in a curtained-off corner of a warehouse or the cramped basement rec room of the director’s house as in an actual studio — and I suspect that in many cases their backdrops consisted of little more than a blanket hung over an exposed drain pipe. The resulting over-reliance on extreme close-ups and tight two-shots makes for a claustrophobic viewing experience, to the extent that your enjoyment of the film will depend a lot on how much you’d like to be locked in a closet with Guy Madison for seventy-five minutes.

It is difficult for me to recommend The Devil’s Man. While it is definitely a weird movie, it is not weird in the wild, WTF way that we typically like, but rather in the way that makes you sit silently for a couple of minutes after it’s conclusion with a mildly quizzical look on your face, trying to decide whether you are disappointed or just perplexed. That it is today considered obscure was inevitable, given that it is so noncommittal on every level of its conception and execution that it barely maintains more than a spectral presence. But being that it is less a film than a ghost of one, it is also mildly haunting, though more in a kind of nagging and annoying way than an actually spooky one. In the final analysis, I guess I would have to say that, if you have ever had a half-remembered story related to you by a narcoleptic two-year-old, and you were pining to have that experience again — only in cinematic form — then The Devil’s Man is the film for you.