Ahh, Ruggero Deodato. Is there anything he can’t make weird? Although best known for cannibal atrocity films like Cannibal Holocaust, Deodato was no different than any other workhorse of the Italian exploitation industry, in that he worked in pretty much every genre that required exploiting. He made cop films, kiddie films, sword and sorcery films, horror films, sexploitation, and in the case of Raiders of Atlantis, a film that manages to steal from both Road Warrior and Raiders of the Lost Ark, and maybe a bit of Seatopia from Godzilla vs. Megalon, in a way that keeps the end result unique despite the lack of originality in its individual parts. Deodato certainly keeps his genre films offbeat, if nothing else.

A salvage operation attempting to raise a sunken nuclear submarine is interrupted by a sudden onslaught of bad weather and tsunamis. The crew of the salvage vessel find themselves stranded (except for their helicopter) in a seemingly deserted coastal town, and by seemingly, I mean that there are plenty of corpses placed in various humorous and surprising “tumble out at ya” locations. Generally, once someone has committed a massacre, they don’t stick around long enough to position the corpses of the slain in places that will provide a cheap shock to anyone who happens by and opens a cupboard or something, but whatever. When the salvage crew finally discovers some living people, they learn that the bad weather they encountered was caused by the rising of the lost continent of Atlantis (last seen beneath the Sahara Desert in Conquerors of Atlantis, being hassled by Hercules). The corpses, in turn, are the first victims of the Atlanteans attempts to reclaim their previous position as masters of the world.

Atlanteans dress like background dancers from that “Shootin’ at the Walls of Heartache” song, and their plan to reconquer the Earth involves a lot of hair teasing, new wave outfits, and a couple dune buggies. As far as impressive military showings go, this one falls somewhere below all those third world militias that go to war in Hawaiian shirts and Chuck Taylors. Really, dune buggies? Those haven’t been important military vehicles since the government disbanded Megaforce. 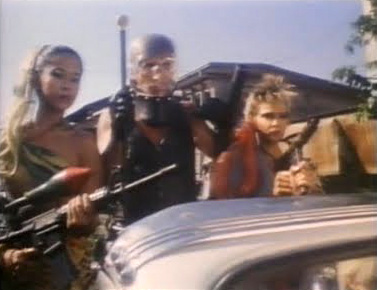 Although Raiders of Atlantis is not a post-apocalypse film, it certainly draws its villains’ fashion sense from such movies, most of which assume that after the fall of civilization, there will be a shortage of food, water, and gasoline but an abundance of shoulder pads, assless leather pants, zany hair and eye make-up, and dune buggies. I’m not exactly an ancient, but I’ve lived a good many years and have yet to ever see a dune buggy. Somehow, according to these movies, dune buggies will be the primary form of transportation in the future, and they will show up in hitherto unimagined quantities.

Despite their similarities to the future people of Billy Idol’s “Dancin’ with Myself” video, the Atlanteans prove to be fairly lame opponents, and a few adequately-trained surface-dwellers with shotguns show everyone why Aquaman was considered such a wuss. Not satisfied with beating up on the Atlantean advance guard, the salvage crew heads into the very heart of Atlantis to rescue a kidnapped scientist and kick a little more ass. In the couple thousand years since we saw Hercules beat up the Atlanteans, their fighting skills, technology, and sense of dress has not improved.

The main short-coming of this film is the budget, which results in some rather lame “toy boat, toy helicopter” effects, but other than that, Deodato manages to turn a goofball script into a bloody, action-packed adventure film that is equal parts Indiana Jones and Mad Max without being the actual equal of either. While the film fails with some of the more ambitious special effects, the stunts are superb. Also helping the film rise above its meager budget is the acting, which is high quality for such a low quality film. No one is going to win any awards, but for the most part, everyone turns in a solid performance. As outlandish as the script is, this is still an amusing high-octane action film that has more than enough thrills, violence, and rolling dune buggies to keep it fun.