These days, it seems like Japan makes about five zombie movies a week, each one more half-assed and dreadful than the last. Once, long ago, when Italy and the United States had lost interest in the zombie film, Japan decided to start cranking a few out. They started out modest but promising, and by the time we got to Wild Zero and Versus, I do believe that I naively exclaimed that the zombie film was well served by Japanese stewardship. Then they made Stacy, and I started to wonder if maybe I had celebrated prematurely. A few years ago, the United Stated rediscovered the zombie film, and zombies themselves became a pop culture phenomenon that ultimately degenerated into hipster zombie parties and zombie olympics and such. Japan wasn’t going to miss out on things, and a whole slew of cheap, new Japanese zombie movies were soon flooding the market. They were and continue to be high on wackiness and low on watchability, pretty much like their microbudget counterparts in America.

You would assume upon hearing the title that Zombie Hunter Rika is yet another entry in the seemingly never-ending parade of disappointing slapstick splatter movies that are getting pumped out of Japan at a remarkable rate. While it does contain some material that would be at home in a film by Noboru Iguchi, Zombie Hunter Rika is actually more of a straight-forward zombie film — or as straight-forward as Japan has ever made them. Think less Machine Girl, more Junk. It’s also kind of lame, but not so lame as to become totally unwatchable, which already makes it one of the best Japanese cult films in years. It’s a sad statement on the merits of the Japanese cult film when “I really only wanted to gouge out one of my eyes to escape it, rather than both of them” is seen as praise. But really, Zombie Hunter Rika isn’t even that bad. I still had both my eyes by the time it was over. It’s sort of bland and lacks energy in spots, and like all recent Japanese cult films, it has a stuttering, awkward pace. However, it also has just enough inspired moments to make it worth watching if you’re already a seasoned viewer of crappy zombie movies.

From what I gather, Zombie Hunter Rika is supposed to be the third film in a loosely related trilogy, but this is a trilogy only in the same sense that, say Dawn of the Dead, Zombie, and Zombie 3 form a trilogy. I have scheduled but have not, as of this writing, watched Zombie Self Defense Force, the supposed first film in this “Nihonbi” series. The second film, The Girls Rebel Force of Competitive Swimmers, is a largely a pinky sex film that has zombies thrown into the mix. I guess Zombie Hunter Rika falls closer to the Zombie Self Defense Force end of the spectrum, but with a little nudity thrown in to make the kids happy. I guess I will eventually discover what’s expected to link the three together, beyond them being about zombies eating Japanese people. It’s the sort of Bob Woodward-esque commitment to uncovering the story that keeps me going. 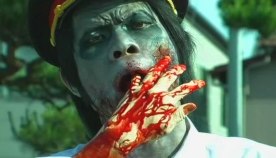 Rika and her best friend live in a world that makes almost no logical sense. There are apparently zombies, and the killing of zombies is a sport that creates pro wrestling style internet superstars like the famed Zombie Hunter (one of the worst white guy actors in Japanese movie history — which is a tremendous claim, I know). At the same time, life seems to go on as normal, and when zombies attack a small town, no one else seems to notice or be prepared for it. Some zombie films bend over backward to explain why it’s all happening. Others go with “we will never know what caused this.” Zombie Hunter Rika seems to be taking the approach of “whatever, man.” Rika and her friend fin themselves trapped on the wrong side of zombie gut munchers with her semi-catatonic sword master grandfather, his conniving new wife, her conniving rockabilly-esque brother, a few couple slapstick locals, and a benevolent zombie who has strapped a metal grate to his face to stop himself from eating people. When Rika loses her arm, they conveniently find the big muscular arm of a slain zombie hunter, graft it to her, and thus is born the world’s most powerful schoolgirl zombie slayer.

Shot on video, amateurishly made, but decently acted, Zombie Hunter Rika benefits greatly from diminished expectations. That it managed to be even moderately entertaining makes it seem like some great accomplishment. Some of the jokes are actually kind of funny. The conniving brother has a great fight scene against a gang of zombies in which he…well, it’s really hard to describe. But let’s say you had a friend who was actually kind of good at martial arts, and he got in a real world version of a Tony Jaa fight. It’s like that. There’s an air of competence about it, but without precision choreography, there’s also a lot of awkwardness, falling down, and flailing about. It was probably the best art of the movie, and it comes pretty early on. Action direction was done by Tak Sakaguchi, best known as the mysterious anti-hero in Versus but also one of the crew along with Noboru Iguchi responsible for the wave of aforementioned slapstick splatter movies. There’s an obvious jump in the energy level whenever Tak steps behind the camera to take over for regular director Ken’ichi Fujiwara.

The rest of the film follows the standard zombie film trajectory of a group of people holing up in a house to defend themselves. For the most part, the writing is really dumb, and the way the script has its character act in the middle of a zombie apocalypse just doesn’t make a lick of sense. Things start to drag during the second act, but no sooner are you starting to feel your patience wearing thin than they graft that arm on Rika and the film wakes up again for the finale. Things get insane in that way that seems unique to weird Japanese films but common to them all, if that makes any sense. A sort of predictable unpredictability, where you don’t know what crazy shit they’re going to make up, but you know they’re going to make up a lot of crazy shit. It’s film writing via getting a bunch of cult movie nerds drunk then letting them finish a script. Throw in a lot of zombie gore and some gratuitous boob shots, and you have a film that manages just barely to be on the enjoyable end of the bell curve.