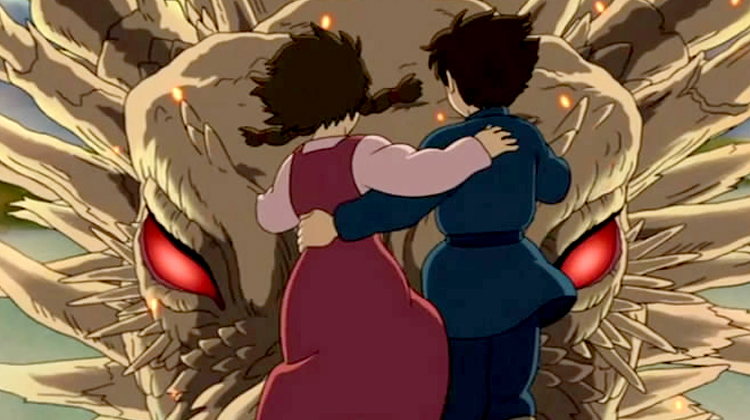 Goro Miyazaki, son of famed Japanese animator Hayao Miyazaki, has achieved with his debut film, Tales from Earthsea, the same sense of profundity as his father. Unfortunately, while the elder Miyazaki’s profundity usually came from things like wonder, imagination, inspiration, wit, emotion, and beauty, Miyazaki the younger’s effort is one of profound tedium and disappointment. Some might defend the poor lad, saying that the shadow of his father is long indeed, and Hayao Miyazaki has set a standard for animated film making that his son, and indeed the entire Japanese animation industry, could never live up to. Of course, you could also say that Goro Miyazaki would be working at a Lawson’s Food Mart if not for his last name getting him a job. So, let’s call it even.

Tales from Earthsea had a lot of hurdles to clear. First, it was based on a sprawling epic fantasy series by Ursula K. LeGuin — a huge undertaking for even a very experienced screenwriter and director to adapt, let alone a guy trying to do both, and for the first time on top of that. Maybe Goro’s dad could have pulled it off, and indeed, rumors swirled that Goro was having such a hard time with the project that Hayao had to swoop in and clean up some of the mess, though I have no idea if any of that was anything beyond idle fan speculation. I don’t know if Studio Ghibli would want to use Hayao to get people to see this movie, or whether they’d want to distance from him as much as possible. 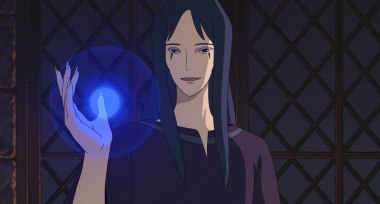 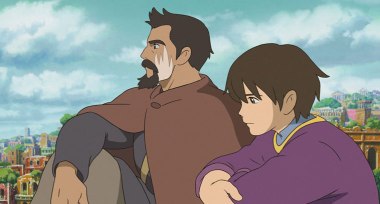 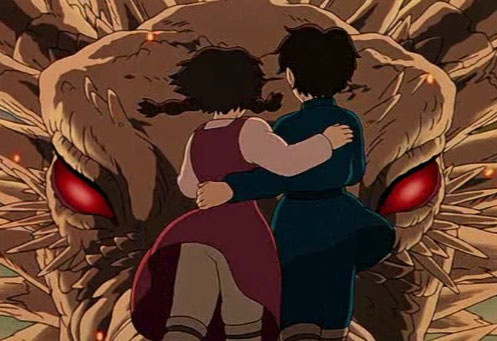 Eventually, Goro wrangled the books into this movie, only to discover that the US market was closed to him. It turned out that the Sci-Fi Channel had been working on their own Earthsea adaptation and was keen to make sure that their Earthsea was the only Earthsea. Or to be more charitable, they wanted to ensure that us poor, dumb viewers didn’t get confused by something as complicated as different movies based on the same source material, even though one ws a cartoon and the other starred Kristin “Chun Li” Kruek. As a result, the release of Tales from Earthsea in the United States was blocked, at least until such time as the Sci-Fi Channel mini-series vanished from the public consciousness (which, to be honest, probably happened a week after it aired). Despite legal wrangling, however, most of the people who wanted to see Studio Ghibli’s take on the material managed to see it anyway. And the word spreading through fans was that, to be frank, perhaps the Sci-Fi Channel was doing Studio Ghibli a solid.

I withheld judgment. After all, my standards are often vastly different from the average anime fan, so my expectations of what would make the movie good might be very different than those held by, say, someone who gave four out of five stars to Elfen Lied. In addition, I am not completely reverent toward Old Man Hayao. He’s made stuff I love, stuff I like, and stuff I didn’t really care about. He probably deserves all the hype he’s amassed, but I don’t really think that any artist is infallible. Similarly, I didn’t expect Goro to be the same as his dad, nor did I find the nepotism all that offensive. So despite the growing trickle of reviews ranging from lukewarm to deeply offended, I went into the movie with as close to an open mind as an old man such as I could ever hope to have.

What I found was that, as bad as some of the reviews made the movie out to be, I actually thought it was a whole lot worse.

Tales from Earthsea fails as a movie on pretty much every level other than background painting. Because I try to be positive, I will say that whatever slave wage artists Goro had drawing the backgrounds, especially in the city scenes, earned their paycheck. Everything else is a boring wreck. The screenplay tries to jam and juggle several of LeGuin’s novels into a two hour film, and it fails miserably. Plots, characters, and events are picked willy nilly from thousands of pages, and remixed into a tedious mess of a movie that seems designed to maximize the time we spend on the mundane (Goro Miyazaki must absolutely love watching people plow and walk through fields) while reducing anything like action, tension, emotion, or character development into as small an amount of time as he could get away with. 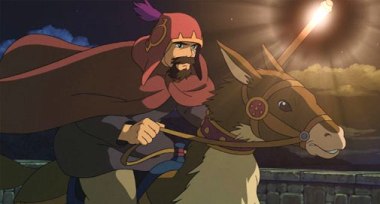 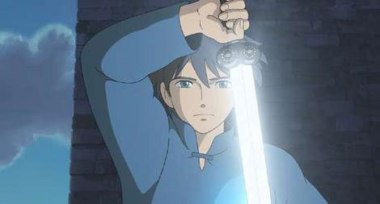 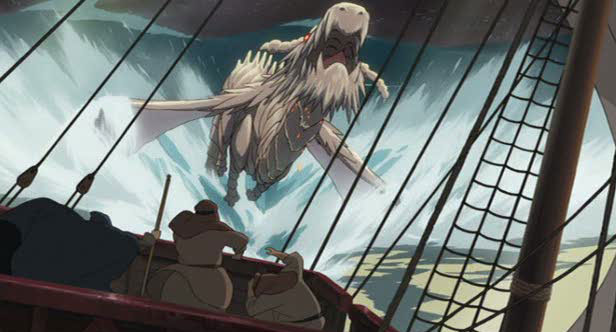 What we are left with is an unengaging, soulless story about a young prince named Arren, who one day stabs his father (hmm…symbolic, Goro?) and runs off. If there was a reason for this, the movie never really cares about explaining it. Arren ha a mysterious split personality, though why and what it means is something they feel doesn’t need to be examined. The wandering lad is soon taken under the wing of a wizard named Sparrowhawk, which is a better name than, say, Orcaseal. The two of them take us on a bored tour of assorted villages as they ride across the land. Eventually, Arren pisses of some slave traders, rescues and pisses off a girl named Theru, and gets himself caught in some ill-defined catfight between Sparrowhawk and his arch-nemesis, the Ziggy Stardust-esque wizard Cob. Eventually, a dragon shows up, because, why the fuck not?

The script puts almost no effort into explaining anything that’s going on or making us care about any of the characters. Things happen because the script says they have to. Characters sleepwalk through actions that don’t seem to have any real motivation. The entire muddled mess is devoid of any emotional hook, dramatic tension, or reason to give a crap about anything.

In my book, the idea of a “good” movie or a “bad” movie is unimportant. All that matters to me is, “Was I entertained?” And a film can, in my eyes, commit no greater offense than being boring. That doesn’t mean slow-moving. That doesn’t mean low key. You can be those things and still be interesting, entertaining, tense, what have you. Tales from Earthsea, however, is boring. Boring, spiritless, and just plain crummy. It’s a movie I wanted to like. I thought the subject matter would be interesting through the eyes of Studio Ghibli. Plus, I always like to champion and enjoy movies other people hated. I thought the potential for a great, sweeping epic was there, or for that matter, for a smaller, more personal story set against a larger background. I got none of that. I don’t doubt that Goro tried hard. I don’t doubt that he was under a lot of pressure. But hey — it’s a big game, and if he couldn’t play it, he shouldn’t have been allowed onto the field just because his dad’s a legend.