Ahh, Sangster and Fisher. If you want my opinion, and you must or else you’d go read a much better website that this, that screenwriter-director team is as integral to the success of the Hammer horror films as the Cushing-Lee acting team. When you make a list of the best films Hammer produced, the Fisher-Sangster duo comes up quite frequently. The whole quartet is at it again with this, Hammer’s third reimagining of a classic Universal Pictures horror icon. By now, there was no real gamble involved in the Hammer formula. Curse of Frankenstein and Horror of Dracula had proven the effort, and Hammer’s only challenge now lie in maintaining the high standards set by those two films. With two Universal legends left, those being the mummy and the Wolfman, Hammer decided to go all old Egypt and bring the bandaged avenger of desecrated tombs into the Technicolor world of Hammer horror.

The first two gothic horror films established a successful order to things, and Hammer saw no reason to tinker with it. Fisher directs, Sangster writes, Cushing takes the lead as a scientist, and Christopher Lee must again command the monster role without speaking a word, or at least very many words. And once again, it all works out wonderfully, though as much as I like this film, I like it less than the Frankenstein and Dracula films that preceded it. Actually, no. Scratch that. I like it less than Curse of Frankenstein and about the same as Horror of Dracula. The script is as smart as ever, and Cushing owns the film once again, but some of the ancient Egyptian sets leave a little to be desired. But we’ll get to all that in due time. 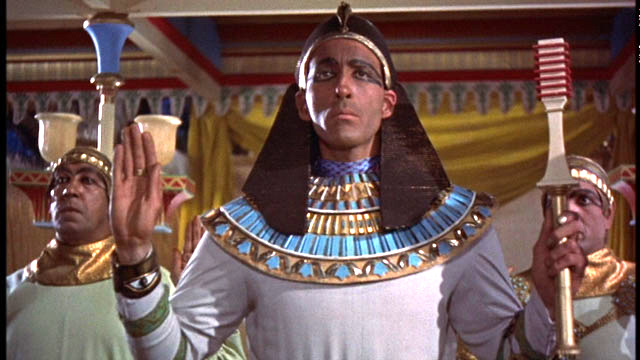 The story is pretty much the same as the story in every mummy movie that has ever been made. Archaeologists disturb the tomb of a Egyptian princess, which awakens her mummy guardian (and invariably, her former doomed lover and high priest) to seek revenge on the desecraters while a guy in a fez makes ominous predictions about the fate of those who defile the tombs of the ancient ones. Yeah, that old chestnut. With these movies, it’s not the newness of the story but the freshness with which you present it, and Hammer’s approach is as fresh as you can get with a guy who’s been dead and stuck in the wall for a thousand years.

The movie takes a while to get going, but once it does get going, there’s no stopping it. Sangster’s dialogue is again top notch, and Cushing and crew manage to deliver it in a way that makes even the most ludicrous monster movie statements seem serious and believable. As would be the case with all of their early gothic horror films, it would have been easy to allow them to sink into the level of camp or winking self-parody. And as with the other films, Hammer refuses to indulge in what modern filmmakers can’t seem to get enough of. The Mummy remains serious and seriously delivered, which makes it believable and convincing no matter how outlandish the action on screen becomes. Everything is delivered with such faith and conviction that it pulls you in, which is why these films work even when there is a lot of talking involved. In fact, the film’s best scene is an exchange between Cushing’s Dr. Banning and George Pastell as Mehemet, the controller of the mummy, in which they debate the merits of digging up ancient tombs, with Mehemet trying to make an impassioned argument that it’s nothing more than grave robbing while Cushing attempts to egg him on in hopes that he’ll get frustrated and reveal something sinister about the mummy that’s been killing everyone involved with the old expedition.

When the action does come, it comes fast and bloody, as Hammer has established it would. Christopher Lee’s mummy may be a little stiff in the joints, but he’s no lumbering slowpoke. He can move at a fair clip, smash through windows, and kick down doors. Once again, Lee is wonderful at acting in a part where not only does he not get to speak, but he is also covered up in pasty-face make-up and bandages. He does get to utter some lines in a flashback to ancient times scene, but they’re little more than incantations delivered in typical ancient incantation tone. His primary tools as the mummy are his eyes, which he uses wonderfully, and his height, which allows him to tower menacingly over everyone else in the cast.

Peter Cushing once again shoulders the burden of carrying the film and does so as admirably as he had in the previous two Hammer horror outings. This movie has a lot of talking in it, but Cushing is the kind of actor that can make you want to listen as he goes on about ancient curses and burial rites. It’s a pretty physical role for him as well, featuring lots of mummy fighting and being flung about. Although Christopher Lee has emerged over time as the number one icon of these horror films, watching them makes you realize that Cushing, the eternal 45-year-old (he was actually 45 when made this one), was the real foundation upon which the Hammer house was built. 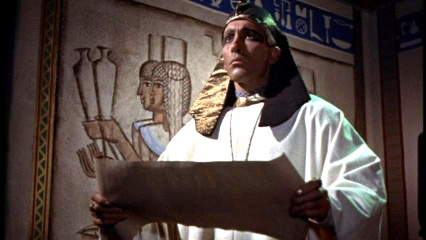 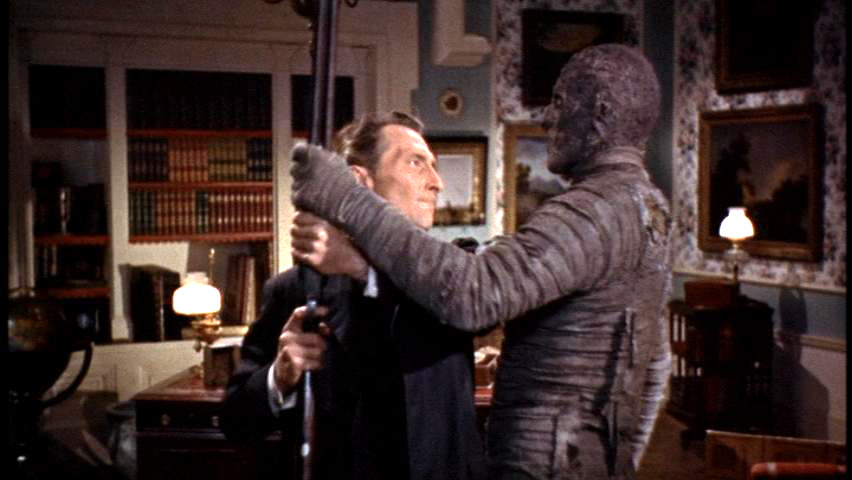 The supporting cast of character actors perform as they always did and generally always would. Yvonne Furneuax is great as Isobel, Doctor Banning’s wife and, inevitably, the spitting image of the priestess Christopher Lee’s mummy was in love with so long ago. How is it that every mummy manages to be awakened from its eternal slumber by someone who just happens to know a woman who is the spitting image of the mummy’s old flame? I guess those past life regressionists are correct. I always thought it was odd that in their previous lives, everyone was an Egyptian princess or some other lofty figure instead of being just some serf or the village idiot. But given the number of times mummies come back from the dead to extract horrible revenge on tomb desecraters only to run into a double of their ancient Egyptian love, I guess there are a lot of latter-day reincarnations of princesses walking around. It’s a lucky thing, too, otherwise we’d have nothing with which to distract the mummies.

As the requisite “mad Arab,” George Powell acquits himself well. It’s a tricky role, especially by modern standards where cultural stereotyping is a more sensitive subject. However, you can’t help but sympathize with Mehemet, who sees British archaeology as nothing more than pompous, condescending white men stealing the bodies and art of another culture for their own amusement. Cushing’s Banning argues that it is through such acts that we learn of the past and fill in the gaps, but Mehemet remains convincing in his argument that it is more about prestige and low opinions of “the natives” than it is about filling in the gaps of history. Sympathetic though he is, when it comes time to solve the problem, he has no qualms about sending his mummy out to choke people and ruin their expensive bay windows.

On a final cast note, I was almost convinced by the voice of Eddie Byrne, who plays Inspector “I deal in facts” Mulroony that it was a young Fred “Herman Munster” Gwynn. He even looks a little like Gwynn, but the voice similarities are uncanny. 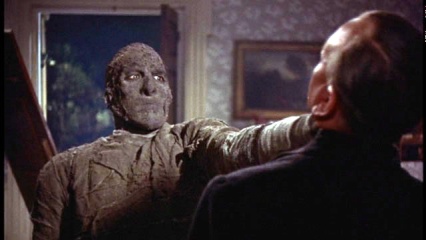 Sets are, for the most part, typically top notch, though the Egyptian settings are pretty unconvincing. The tomb walls look light as cardboard, even when characters are pretending they weigh a lot, and everything is spotless clean and looks like it just came from the prop department. When recreating Victorian England, Hammer was unmatched, but they’re out of their element and/or budgetary constraints with their Egyptian sets. Still, they’re at least pretty, and the rest of the movie is good enough to make it not matter all that much. As is the case with both Horror of Dracula and Curse of Frankenstein, one can’t help but compare it to the old Universal film. I’m a big fan of Karloff’s The Mummy, and I’m a big fan of this one. I think they’re different movies for different times, and I don’t really see any point in trying to figure out which one is “better.” Just enjoy the fact that they’re both available to you on DVD. Hammer’s mummy film is as brash, daring, and energetic as their previous two efforts, and as with them, it’s a real treat.

The studio’s fate was sealed after the release of this film and it was all horror, all the time from there on out. Not a bad thing, though I’d be interested in seeing some of the studio’s pre-Quatermass war films. As with Dracula and Frankenstein, several sequels followed in the footsteps of The Mummy, though none were as good as some of the Frankenstein or Dracula sequels. Hammer would also go one to try their hand at the final Universal monster, resulting in the superb Curse of the Werewolf, which because it didn’t star Christopher Lee or Peter Cushing, gets less attention than the other three films, though it is no less a picture even though Oliver Reed’s Wolfman is spectacularly ugly. Mummy sequels included Mummy’s Shroud and Blood from the Mummy’s Tomb, but none featured the Fisher/Sangster/Lee/Cushing crew again.